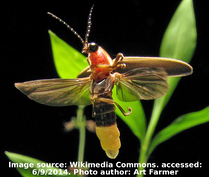 Luciferases are a class of enzymes capable of catalyzing chemical reactions in living organisms resulting in the emission of photons. The most familiar bioluminescent organism for most people is the firefly (Photinus pyralis) and perhaps not surprisingly it is also the most commonly used bioluminescent reporter. This beetle emits a yellow-green light with a peak emission at 560nm. Shortly after the initial article describing the cloning of firefly luciferase was published in 1985, several studies utilized luciferase as a genetic reporter in plant and mammalian cells. Luciferase assays have since become a gold standard in gene expression analysis and a luciferase gene (one of many available to choose from) is now a common feature in reporter plasmids.

A reporter gene, such as luciferase, usually serves as an indicator of transcription within cells, where detection of the reporter protein or its enzymatic activity is measured. The effect of promoters or enhancer regions on gene expression can be determined by detection of the reporter in a specific assay, which ideally would have low background signal, high sensitivity and of course be quick, accurate and safe. In the case of a luciferase assay, photon emission is measured resulting from the catalysis of a chemical reaction requiring luciferin, ATP and oxygen as substrates. Production of photons by this bioluminescent reporter occurs slower than fluorescent-based methods, such as excitation of Green Fluorescent Protein (GFP) because of the nature of the chemical reaction compared to using a high-intensity laser to rapidly excite GFP. As a result of the different mechanisms to produce photons, chemiluminescent reporters are generally less bright than fluorescent proteins, but have the advantage of lower background levels and improved signal sensitivity since photons are simply measured – they are not required to initiate the reaction. Table 1 compares some general advantages and disadvantages of luminescence versus fluorescence.

Table 1: Properties of Luminescence versus Fluorescence

Although luciferase isolated from the firefly beetle (Photinus pyralis) is the most frequently used bioluminescent reporter, other luciferases have been identified in various species with differing kinetics, substrate requirements and photon emission wavelengths. Renilla luciferase from the sea pansy (Renilla reniformis) emits a blue light with a peak emission at 480nm upon catalyzing a chemical reaction with the substrate coelenterazine and is likely the second most commonly used luciferase. Other organisms from which luciferases have been cloned from include click beetles (Pyrophorus plagiophthalmus), railroad worm (Phrixothrix hirtus), and a variety of marine crustaceans. Many of these luciferases have been subjected to further engineering to improve upon the properties of the native enzyme, which are summarized in Table 2 below.

The typical luciferase-containing plasmid is most often used to investigate the effect of regulatory elements, such as promoters, enhancers and untranslated regions, or the effect of mutations of these regulatory elements on gene expression. The regulatory element (wild-type or mutant) is cloned upstream of the luciferase gene in the plasmid, which is then introduced into the desired mammalian, plant or bacterial cells. Expression of luciferase as the reporter gene is measured via its activity to produce light, often with a luminometer or scintillation counter, and the activity measurement can then be used to quantify the effect of the regulatory element. Depending on the specific luciferase used, a compatible substrate must be provided for the enzyme to catalyze the light-producing reaction. Many luciferase assays require cell lysis as the most efficient means to disrupt the cell membrane and deliver the substrate; however, secreted luciferase or the use of alternative substrate reagents can permit measurements of luminescence from live cells.

Expression of luciferase can be monitored as a downstream measurement of miRNA efficiency on a target sequence. The gene of interest is cloned into a plasmid downstream of luciferase containing a stop codon, which is then transfected into the desired cells. A hybrid mRNA transcript containing luciferase and the gene of interest permits translation of functional luciferase, until miRNA target and degrade the mRNA sequence, resulting in a decrease in luciferase activity. This experimental protocol can readily screen miRNAs for effectiveness.

Known cellular signaling pathways can be investigated in a high-throughput screen using luciferase activity as a measure of signaling activity. Multiple response elements are cloned into a plasmid upstream of a minimal promoter linked to luciferase. Activation of the pathway will result in luciferase expression and more complex cell treatments can be designed to further explore the pathway.

Which luciferase and assay have you used? Share your tips below!