Plasmids 101: A Brief History of Plasmids and an Improved eBook!

Bioblasts? Plasmagenes? In the 1940s and 50s, scientists were working to understand genetic cytoplasmic factors that could be transferred between cells. At the time, these extranuclear agents of heredity were thought of as everything from parasites, to symbionts, to genes and the labels applied to them were vague or contradictory, owing in part to the fact that very little was known about the role these factors played within an organism.

So how did plasmids get their name?

In 1952, Joshua Lederberg set out to clarify the classification of these cytoplasmic inheritance factors. He proposed the catch-all term “plasmid” derived as a hybrid of "cytoplasm" and "id" (Latin for 'it'), as “a generic term for any extrachromsomal hereditary determinant”. His proposal, however, was basically ignored. A separate term, “episome”, defined as “a non-essential genetic element which could exist either autonomously or integrated into the chromosome” was proposed a few years later by Élie Jacob and François Wollman and became the widely adopted name for these elements. At the time, the use of episome seemed appropriate, especially since the Fertility, or F-factor discovered by Ester Lederberg in 1952 was noted to integrate into the E. coli chromosome in some cases. This terminology held until the 1960s when scientists began to study other extrachromosomal particles, particularly Resistance or R-factors. Like F-factors, R-factors could be transferred between bacteria via cell-to-cell contact; however, scientists noted that, unlike F-factors, the evidence did not support the idea that R-factors could integrate into the chromosome. Thus the term “episome” was eventually dropped and we’ve been using "plasmid" ever since! 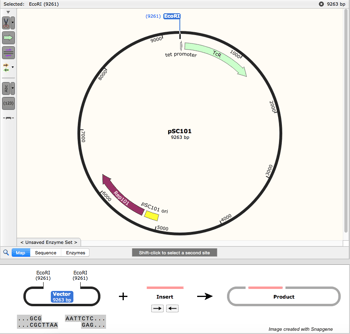 From napkins to notebooks

Although discovered in the early 1950s, it took until the 1970s for plasmids to gain prominence in the scientific community. Prior to this, bacteriophage, especially lambda, was the tool of choice for molecular biologists wanting to study bacterial genetics. This all changed thanks, in part, to a collaboration initiated at a Hawaiian deli in 1972. Using a deli napkin for paper, a small group of scientists including Stanley Falkow, Stanley Cohen, Herbert Boyer, and Charles Brinton concocted a wild idea of using the newly discovered EcoRI enzyme (and its predictable cut site) to develop the first plasmid “cloning” experiment. Dr. Cohen and colleagues treated a tetracycline resistant plasmid, pSC101, and a newly developed kanamycin resistant plasmid, pSC102, with EcoRI and selected for E. coli transformants that were resistant to both. When this proved successful, pSC101 became the first plasmid cloning vector and molecular biology was never the same.

Over the next few years genes from different bacterial (and eventually mammalian) species were cloned into plasmids and new cloning vectors such as pBR322, pACYC, and pUC were developed to provide higher copy number vectors that could be used in these cloning experiments.

Although plasmids started as a somewhat niche area of research, they are now seen as an ubiquitous tool that can be diversely applied to many different experiments. Addgene was founded in order to store, QC, curate, and distribute them all in the name of making it a little bit easier for scientists to conduct their research! Since their discovery in the 1950s, plasmids have greatly impacted many areas of biological research and have been key in advancing our knowledge in areas such as bacterial conjugation and recombination, replication and topology, and cloning and gene expression.

And now for some exciting news... You can now download the newest version of Addgene's Plasmids 101 eBook! In keeping with our goal of creating a one-stop reference guide for plasmids we've updated and added new content to our eBook. Some highlights of the 2nd edition eBook include: new chapters on genome engineering, cloning, and plasmid tags, addtional content added to the "Plasmids that Glow" and "Viral Expression Vectors" chapters, and more pictures and pro tips.  Happy reading!

Learn more about the history of plasmids and cloning: