In Part 1 of our mouse modeling blog series, we covered techniques that can be used to introduce genetic modifications into mouse embryos. But once you generate a growing colony of genetically engineered mice, what can you do? In this post, we’ll cover why and how to cross mice to create double knockout lines and Cre-lox lines, and how to properly control for genetically engineered mice in your experiment.

As you’ve learned in Part 1, there are many types of genetically engineered mice: transgenic mice, knockin and knockout mice, and conditional knockin or knockout mice. While these techniques are each useful for introducing one modification into the mouse genome, they are not commonly used to introduce multiple mutations. This is because as more mutations are introduced into a single embryo, the likelihood that a mouse will end up with the intended genotype at every allele decreases.

Instead, genetic engineering should be used to separately introduce each mutation independently into different mice, and then these strains should be crossed to generate double-mutant offspring. Crossing mice allows for the production of offspring that have a combination of the mutations engineered into each of their parents. Here’s how to cross mice, using a simple example with the goal is to generate mice that have two modified genes in their genome, and assuming Mendalian patterns of inheritance:

In order to ensure that your genetic modification will be passed along to all of the offspring in the F1 generation, your breeding scheme should start with parental mice that are each homozygous for one of the two mutations that you want combined in your offspring. Genotyping involves getting a small piece of tissue from each mouse (typically via either a blood draw, tail clip, or toe clip) and using PCR with the appropriate primers to detect your targeting vector or gene of interest.

Once you’ve performed your first cross, congratulations! You’ve generated F1 mice and they are the next step in the journey towards producing mice with your desired combination of mutations. Assuming your parental mice were all homozygous for your genes of interest, your F1 mice will be carriers at those alleles.

Some alleles, such as Cre, function when hemizygous, meaning that only one chromosome needs to contain the transgene in order to see an effect. Hemizygous mice can be included in breeding strategies identical to those used for breeding heterozygous mice. In this case, your parental mouse should be hemizygous at the appropriate allele. When crossed to a mouse that is homozygous for a different mutation, the F1 offspring will be either hemizygous or null at one locus (e.g. Cre) and heterozygous at the other.

Now, your goal is to generate mice that are homozygous for all of your desired genes. Remember Punnett squares from high school biology? They will come in handy here! Crossing your F1 heterozygotes to each other will generate approximately 1 in 16 mice that harbor homozygous alleles at both of your genes of interest. About 1 in 4 mice will be homozygous for the mutation at one, but not both, of the alleles. You can cross homozygous or heterozygous mice from your F1 generation to continue building your colony.  You should genotype all of your F1 mice, as well as progeny from future generations.

You’ll want to generate enough mice that are homozygous (or hemizygous) at all of your desired alleles to conduct your experiments. You should also maintain your parental strains throughout this process.

In the F1 and later generations, mice that are homozygous wild type at one or both of the alleles, or heterozygotes, are not a waste. Best practice is to use littermate controls in your experiment - use mice that were bred in your colony, as opposed to ordering control mice from a stock center. This serves as a better control since the experimental and control mice will have been raised in the same environment and will harbor similar epigenetic modifications.

Whether your mouse colony consists of genetically engineered mice with a single mutation or strains that have been crossed, there are many considerations for effectively breeding your mice. Because their generation involves the integration of a novel gene randomly into their genome, some transgenic strains are difficult to breed. Some problems with transgenic mice that can impact reproduction include embryonic lethality, a short lifespan, or infertility and can arise due to copy number, expression level, and site of integration of the transgene. These problems can be mitigated in different ways. Prior to engineering a transgenic strain, the promoter being used should be tested in cell lines to determine how it impacts the expression level of the transgene. In existing strains of mice, the transgene can be maintained on a hemizygous or heterozygous background to reduce copy number or expression level effects.

Another challenge that may arise when crossing mice with multiple mutations is if the mutations are on the same chromosome. Homologous chromosomes recombine during meiosis, creating gametes that contain a mix of genetic material from each of the parents. If both of the mutations that you are trying to cross are located on homologous chromosomes in the parental generation, they are likely to stay on separate chromosomes in future generations as well, a concept known as linkage. This hinders the likelihood that mice in the F2 generation and beyond will be homozygous for both mutations. The shorter the distance between the two loci of interest on the chromosome, the less likely crossing over is to occur between the two loci, which would get both mutations onto the same chromosome. Until crossing over occurs between the two loci, F2 and later generations of mice can only be heterozygous for each mutated allele. 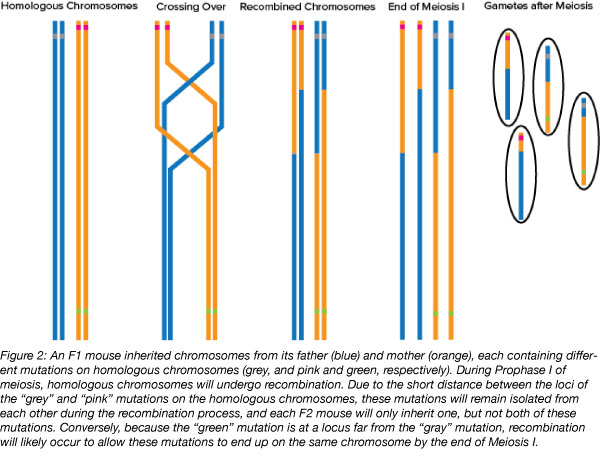 Cre-lox strains are a common example of mice that are derived from crosses. In Part 1, we explained how genetic recombination in mice expressing both Cre and LoxP occurs. But how are these mice made to begin with? Cre-lox mice are made from crossing a strain that expresses Cre with a strain that expresses a floxed gene of interest. Cre may be expressed globally (in every cell of the mouse) or in a tissue-specific manner (with expression controlled by a tissue-specific promoter). And, Cre may also be either constitutively expressed, or inducible (this is explained more in Part 1 of this series). In any case, Cre is a dominant phenotype, while you’ll want the floxed gene to be homozygous in order for Cre-mediated recombination to affect every copy of your target gene in your experimental mice. This will require several rounds of breeding in which you’ll want to genotype your mice for expression of Cre, loxP, and your gene of interest. To ensure that the effects you see in your experiment are a result of recombination at the floxed site, your control should be littermates that express Cre but not loxP. 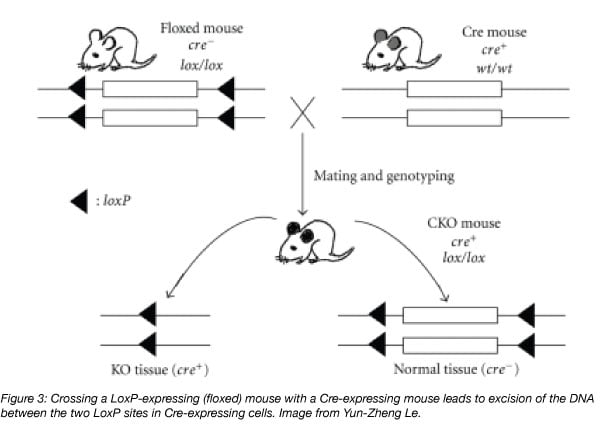 With this two-part guide to mouse modeling now complete, you should be prepared to plan an experimental strategy that uses genetically engineered mice. Best wishes on your experiment!