Interview: Ed Boyden on Optogenetics, Neuroscience, and the Future of Neuroengineering 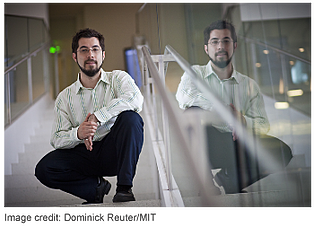 As MIT's Ed Boyden explains it, his goal is "to understand the brain at a level of abstraction that enables the engineering of its function." Once scientists can do that, they will not only understand how the brain works, but also how to fix it when things go awry. To reach that goal, his group develops tools to tinker with brain circuits using the power of light.

In a recent article published in Nature Methods, Boyden and his team describe the discovery of a light-sensitive opsin from algae that is sensitive to red light instead of blue, which will allow researchers to independently control the activity of two populations of neurons at once.

Addgene spoke to Boyden about this latest optogenetics advance, the big questions that motivate his interest in neuroengineering, and some of the optogenetic tools that are still missing.

Addgene: For those who may not be experts, can you give me a brief history of optogenetics? How long has this idea been around?

Boyden: Optogenetics is a toolset that lets you turn the electrical activity of neurons on or off using pulses of light. By activating a neuron or set of neurons, you can see how it contributes to behavior or pathology, and by disabling neurons you can figure out what they are necessary for. We published our first paper on optogenetic tools for neuroscience back in 2005, both activators as well as silencers of neural activity. Since then, there has been a steady stream of papers describing new photosynthetic or photosensory molecules that come from basically every branch on the tree of life. Our most recent paper in Nature Methods offers the first true two-color pair. We'll be sending it to Addgene in a matter of days. 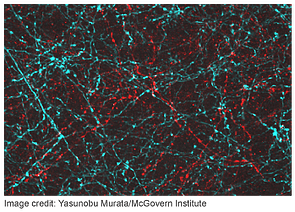 Addgene: Can you tell us a little more about this new two-color tool and what it can enable?

Boyden: There are many examples where you want to activate two sets of neurons and see how different parts of the brain or the cells within them work together or perhaps compete against each other. Getting two-color stimulation has been a holy grail of the field. The problem is that all of these molecules are sensitive to blue light. Many have tried to make green molecules, but then alongside blue they actually have a lot of crosstalk. So we developed a red molecule. We also had to make the blue light molecule much, much, much more light-sensitive. Then you can use dim blue light and red light together.

Understanding the brain through optogenetics research

Addgene: What are some of the big problems that optogenetic tools can help us to address?

Boyden: There are two concrete areas of benefit: First, there is fundamental understanding of the brain, which has humanistic and philosophical implications. As an example, a group at Caltech used an optical fiber together with optogenetic tools in a deep part of the brain, making it sensitive to light. When they illuminated this region, the animals became aggressive. If we can understand the neural basis of violence or aggression, it might do a lot to explain more difficult aspects of human behavior, and maybe we can get a handle on some of these mysteries.

Another application is clinical; can we find ways to treat patients? Over a quarter of a million people have some kind of neural implant already. If we can use light to more specifically activate a set of neurons, maybe we could treat patients suffering from Parkinson's, chronic pain, deafness, or other conditions.

Addgene: You've contributed various plasmids to Addgene over the years, many of them very popular. Why has it been so important to you to distribute these tools as freely as possible?

Boyden: I think because neuroscience has so many different goals: to understand how a mouse changes emotions, to see how a monkey changes decision making, to cure a human patient. We can't do it all by ourselves. Getting these tools out into the world is a way for us to focus on building new tools, not solving thousands of neuroscience problems on our own. There are lots of neuroscientists out there; we want them to use these tools, so we can focus on the next round.

Addgene: What tools are still missing from the optogenetics toolbox?

Boyden: That's a good question. We've made a lot of progress. I would say we still would like to find ways to make these tools more selective for different ions. Right now, we can modulate electricity. If you could selectively let in calcium or some other specific ion that would be interesting. It would also be great if you could make neural silencers that require less power. Those are two of the biggest ones. And as a third example, it would be helpful to have molecules with better two-photon properties, so you could activate single cells in arbitrary patterns in the brain.

Addgene: Do you have any special tips or tricks for someone looking to try these optogenetic tools out for the first time?

Boyden: There are always considerations for each species. This could be a three or four hour conversation. The brain is very complex and we've hosted hundreds of visitors in our lab to help them understand their specific problem. Every species is so different – an awake monkey is different from a cell in a dish. I always tell people, 'Be driven by your science.'