Let There Be LITE Plasmids 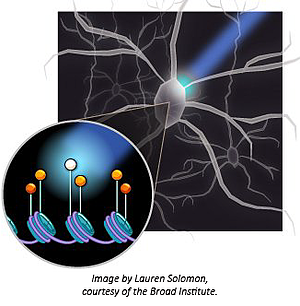 When neuroscience graduate student Silvana Konermann first entered Feng Zhang’s lab at MIT, the use of customizable DNA-binding domains based on transcription-activator-like effectors (TALEs) as anchors for genome engineering applications was still very new. Now, Konermann and her colleagues including Zhang and Mark Brigham have taken the technology to another level with the addition of two light-sensitive ingredients - CRY2 and CIB1 – which they borrowed from Arabidopsis thaliana. The results are light-inducible transcriptional effectors (LITEs) designed to bind specific genes and turn them on or off, literally at the flip of a (blue) light switch.

Zhang’s team devised the plasmids now available in Addgene’s repository for use in neurons, both in culture and in living brain tissue. “The brain is such an amazing and dynamic organ,” Konermann explained. “It helps us adapt to influences in our environments. We are able to react and learn. All of this requires genes to be regulated dynamically.”

To understand how that works in memory formation or other brain functions, Konermann needed tools to manipulate the expression of specific genes in the brain in reversible fashion. And that’s exactly what the LITEs now enable. In a Nature paper introducing the optogenetic tool, Konermann and Zhang showed they could package LITEs in viral vectors and genetically target them to specific cell populations. They demonstrated use of the LITEs to control gene expression in mouse neurons and in the brains of living mice both quickly and significantly. Genes under LITE control showed a rise in transcription in as little as 30 minutes after light stimulation. Under those optogenetic controls, gene expression levels reliably increased in vitro by a factor of 10 to 20.

A flexible and modular optogenetics tool

The researchers also showed just how flexible their LITE system could be by applying it to altering gene expression via epigenetics with the addition of histone modifiers. “We want to allow people to prove the causal role of specific epigenetic modifications in the genome,” Zhang said in MIT’s press release.

"First, the light-responsive molecules of cryptochrome 2 are the chromophores flavin-adenine dinucleotide and methyltetrahydrofolate, which are universally abundant. Second, induction of transcription occurs within minutes of light exposure. Third, the response can be graded with light dose and is fully reversible after light retraction. Finally, because light can be applied non-invasively, its use is not restricted to cultured cells but extends to freely moving animals, as established for conventional optogenetic tools."

In total, the researchers applied the LITE system to 28 different genes to establish it as “a novel mode of optogenetic control of endogenous cellular processes." The LITE system can now be applied to unraveling the genetic and epigenetic players in normal biological processes and disease states.

While LITE plasmids have clear application to anyone with an interest in neuroscience, their use is by no means limited to particular model organisms or cell types. “This tool is really flexible and modular,” Konermann said. “Transcriptional activators are easy to expand or combine with different effectors. I’d encourage people to get creative with them for their own uses.”

Konermann said she is already aware of research groups making use of the new optogenetic tools in C. elegans and in Plasmodium. For those who do want to apply LITEs for the transformation of neurons, she offers a tip: save yourself some time by making an AAV1 supernatant. (The details can be found here.)

So tell us, readers, how will you get creative with LITE?

, with the addition of histone modifiers,