Knowing where bacteria are located within their host is often key to understanding their role in both health and disease. To observe bacteria in action, researchers have developed in vivo bacterial reporters that use fluorophores and luciferases to track bacteria in real time, but each of these reporters has its drawbacks. Acoustic reporter genes (ARGs) overcome these limitations by using gas vesicle reporters that are detectable by an inexpensive and widely available imaging platform: ultrasound. 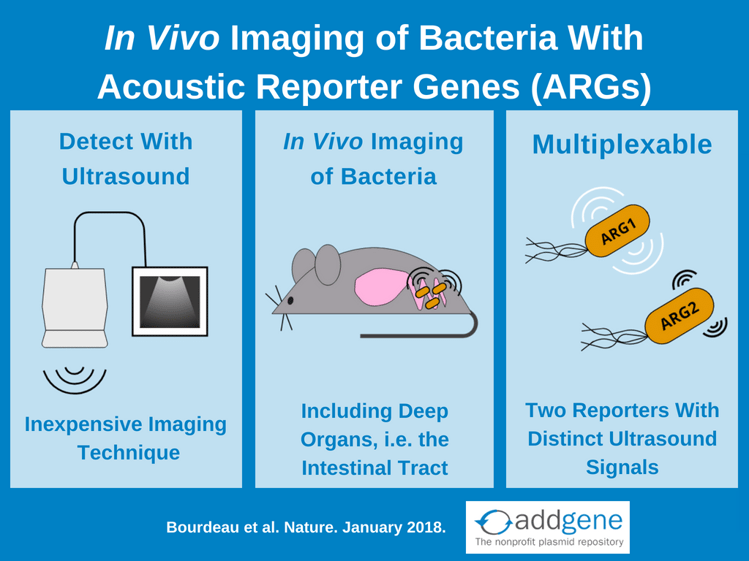 Challenges of in vivo imaging with existing bacterial reporters

Acoustic Reporter Genes (ARGs) are engineered gene clusters that encode proteins that form bacterial gas vesicles. These ~200nm long vesicles have hollow interiors and a protein shell that excludes water but is gas permeable. These vesicles are primarily used by water-dwelling photosynthetic bacteria and archaea to regulate their buoyancy.

By piecing together genes from gas vesicle operons from two different bacteria, Bourdeau et al created two constructs optimized for expression in E. coli: acoustic gene 1 (arg1) and acoustic gene 2 (arg2). The key difference between arg1 and arg2 vesicles is the amount of soundwave pressure required to collapse them: arg2 vesicles collapse at a lower pressure than arg1 vesicles. Following collapse, vesicles are invisible to ultrasound, which allows for differentiation of arg1 and arg2 ultrasound signals. This also means that multiplexing is possible if bacteria are sequentially exposed to acoustic pulses with high enough amplitudes to first collapse arg2 and then arg1 vesicles. By comparing ultrasound images pre-collapse and post-collapse of arg2 and then arg1, each ARG’s distinct ultrasound fingerprint can be detected. Bourdeau et al calls this method acoustic collapse.  Importantly, acoustic collapse doesn’t affect bacterial viability and with 20 hours of growth following acoustic collapse E. coli re-express arg1 gas vesicles and restore their ultrasound signal.

Following in vitro characterization, Bourdeau et al performed a proof-of-concept experiment to demonstrate the most exciting application for ARG’s: in vivo imaging. Specifically, arg1 expressing E. coli aided in ultrasound imaging of the mouse gastrointestinal tract. The E. coli strain Nissle 197 (ECN) was used for these experiments because it’s a probiotic strain that can colonize the mammalian intestinal tract and has been used for 100 years to clinically treat enteric infection and inflammatory bowel conditions. In these experiments, arg1 expressing ECN were injected into the mouse colon, imaged via ultrasound, and the images compared to mice injected with ECN expressing lux. arg1 and lux reporters both allow for visualization of the bacteria, but lux imaging shows only that the bacteria localize to somewhere in the mouse abdomen. arg1 signal, however, can be overlaid onto anatomical ultrasound imaging to show where the bacteria localize in relation to internal organs. The limit of detection for arg1 expressing ECN is 109 cells/ml, which is within the range of  the ~1011 commensal bacteria per gram of stool for humans. Bourdaeu et al also used arg1 to in vivo image tumour-homing S. typhimurium strain ELH1301.

Bourdaeu et al see this as just the beginning of the development of ARGs and have already developed a high-throughput screening method for serial acoustic collapse to aid in the development of ARG constructs with new acoustic phenotypes. Want to start using acoustic reporters for your research? arg1 and arg2 plasmids are available from Addgene!