In 2008 the Quake Lab at Stanford University became interested in exploring biological dark matter – large tracts of the microbial tree of life that remained unexplored. Using new single-cell sequencing approaches, the lab was able to eliminate the need for axenic (pure) laboratory cultures to study these microbes. From 16S rRNA sequencing, hot springs were known to be diversity hotspots containing abundant biological dark matter and so the lab organized a sampling trip to Yellowstone National Park (YNP).

Extremophiles - phylogenetically diverse microbes living in extreme physical and chemical conditions like YNP thermal sites - are also of practical interest since they’ve previously yielded valuable enzymes. Famously, Taq polymerase – from Thermus aquaticus bacterium – was discovered at Octopus Hot Spring at YNP, and since then, many researchers have searched for novel organisms and enzymes from these extreme environments.

Gearing up for sample collection at the hot springs 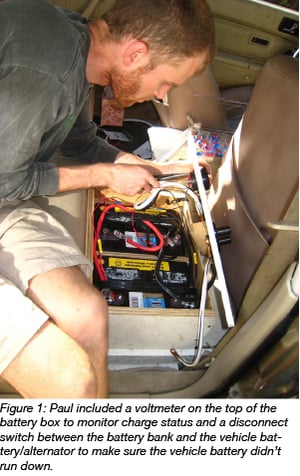 My husband, Paul Blainey, at that time a post doc in the Quake Lab, volunteered to do the sampling and I happily agreed to accompany him to YNP the following year. Geoff Schiebinger, another Quake Lab member joined for half of the trip. Preparations ahead of time included contacting YNP staff to arrange permits to visit places not accessible to the public and retrofitting our car with a freezer wired to a charger and two deep cycle batteries for power so the samples could be kept frozen after collection.

In September we arrived in YNP just as the weather was starting to turn chilly at the 8,000 foot elevation. Due to the 3,471 square mile size of YNP, it took some time to map a route that would reach all of the remote areas, including one hot spring requiring an overnight hike in.

Since the high temperatures and unstable ground around these hot springs make them extremely dangerous, we used telescoping poles to collect water samples from a distance. At each collection site, we took GPS coordinates, water temperature readings using a heat gun, and pH measurements. We collected small water and sediment samples, stabilizing them in ethanol and/or glycerol, since there are no universal conditions for culturing or long-term stabilization of unknown bacteria. 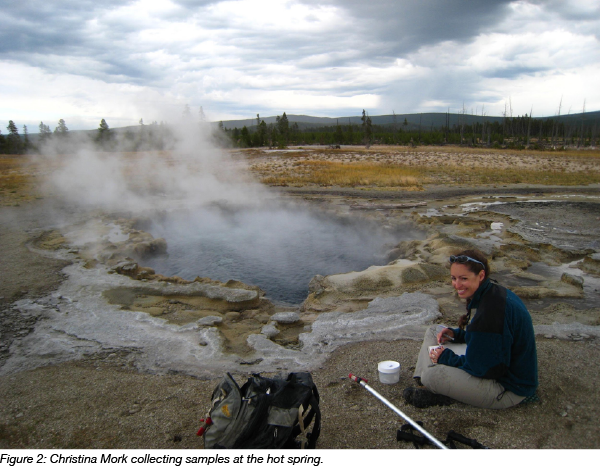 Hiking all day and processing samples by night was fun but also very tiring. It feels a bit strange to be using a micropipette and gloves at a campsite. And it was exciting – one night while trying to process samples at the picnic table before dark, a bison wandered into our campsite. We had to abandon our samples and move farther away until the bison meandered off. In the end we were able to safely get back to our lab work. 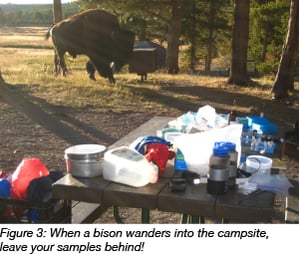 This year it was wonderful to learn that one project led by postdoc Dr. Stephanie Schmidt not only produced partially assembled genomes, but also led to the discovery of IgnaviCas9, a new CRISPR enzyme from a sample from Mound Spring in Lower Geyser Basin.

They used a mini-metagenomics method using microfluidic parallelization to sequence this highly complex hot spring sample. The sample was separated into smaller samples of 5-10 cells each for sequencing, allowing for lower complexity with higher throughput and rigorous assembly. There, they found a CRISPR array in the resulting Ignavibacteriae phylum genome.

IgnaviCas9 is a hyperthermostable Cas9 CRISPR nuclease that is active up to 100°C.  The IgnaviCas9 protein is 1,241 amino acids long, has optimal sgRNA spacer length of 22-25 nts, and is thermostable between 31-100°C.

They published their finding in a bioRxiv article and in PNAS.

What can you do with IgnaviCas9?

Why would a thermostable Cas9 be useful? It can enable applications where reagents must be stored at elevated temperatures for long time periods and workflows where CRISPR nuclease activity is desired and time or protocol steps can be saved by flexibly deploying IgnaviCas9 without concern about its stability under harsh conditions. One example application from the publication is the removal of unwanted cDNA derived from 16S rRNA in bacterial RNA-Seq. This enriches for transcripts of interest without an increase in the number of steps in the protocol. IgnaviCas9’s incredible thermostability makes the enzyme particularly useful.