How Exercise Purges Stress and Keeps Depression at Bay 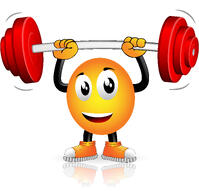 It’s well known that exercise can help fight stress and depression, and now researchers have reported a mechanism based on studies of transgenic mice that helps to explain how it works. The findings in a recent issue of Cell demonstrate how PGC-1a1, a transcriptional coactivator induced in skeletal muscle by exercise and endurance, protects the brain from depression.

Mice that are genetically modified to produce extra PGC-1a1 only in their skeletal muscle show resistance to stressful circumstances – including unpredictable loud noises and flashing lights - that sent average, control mice into depression. In case you were wondering, depression shows up in mice as poorer performance on forced swim tests and less interest in sweets.

Further examination of the mck-PGC-1a1 mice found it wasn’t that they were simply immune to stress altogether. Their muscles showed an increase in inflammatory cytokines as a result of those mild stressors as usual, but somehow their brains were protected.

Effects of Activation of the PGC-1a1 Pathway

That’s key because, unlike kynurenine, kynurenic acid can’t cross the blood-brain barrier. By lowering circulating levels of kynurenine in the body, the brain is protected from stress-induced biochemical changes that could otherwise lead to depression. And there you have it, mck-PGC-1a1 mice, and those who exercise, show resistance to depression. For the researchers led by Dr. Jorge Ruas of the Karolinska Institutet, the discovery really wasn’t what they’d expected.

"Our initial research hypothesis was that trained muscle would produce a substance with beneficial effects on the brain,” Ruas said in a press release. “We actually found the opposite: well-trained muscle produces an enzyme that purges the body of harmful substances. So in this context the muscle's function is reminiscent of that of the kidney or the liver.”

The discovery is a window onto communication between the muscle and brain, which may have therapeutic implications, say Hyo Youl Moon and Henriette van Praag of the National Institute on Aging in a commentary about the new work published in Cell Metabolism. But, they note, there is plenty more to explore.

“It will be important to identify the key proteins and metabolites that are dynamically secreted by muscle during exercise to meet the brain’s physiological demands,” they write. “In the future, these may lead to treatments for a variety of brain disorders, including psychiatric and cognitive conditions as well as neurodegenerative diseases.”

I don’t know about you, but I think I could use a good run right about now. And, if you are looking to get your hands on PGC-1a for studies in your own lab, you’ve come to the right place. Get started with PGC-1 plasmids from Addgene.