This post was contributed by guest blogger, Krissy Lyon, a PhD candidate in Neuroscience at Harvard University.

Just as computers, cell phones, and cars become more technologically advanced leaving earlier versions obsolete, the techniques we use in lab are replaced by improved versions that save both time and money. Yet, knowledge of historical techniques comes in handy whether you are perusing classic papers or are brainstorming new technological innovations. Let’s take a look at three historical techniques: southern blotting, restriction mapping, and sequencing gels, as well as their modern equivalents and see what we can learn from their evolution.

Southern blotting, named for its inventor Edward M. Southern (1), can be used to detect DNA identity, size, and abundance. If a scientist wants to know if an organism has a particular gene mutation, southern blotting can be used to identify the presence of that mutated gene. In southern blotting, DNA is fragmented into smaller pieces, run on a gel, and transferred to a membrane for analysis through hybridization of a radioactively or fluorescently labeled probe. If the DNA is complementary to the probe (for example, has the sequence of the mutated gene the researcher is searching for), then the probe will bind to the sample thereby labeling it. The label can then be visualized by autoradiography and X-ray film for radioactively labeled probes or by the presence of fluorescence for fluorescently labeled probes. Colorimetric and luminescence based detection methods are also commonly used. In all cases, the result can be quantified by the strength of the signal in comparison to a control sample.

Today Southern blotting has been largely replaced by real-time PCR to answer the same experimental questions. Real-time PCR detects and quantifies a gene or DNA sequence of interest by recording DNA abundance throughout the amplification process, rather than just at the end as in standard PCR. This allows the researcher to compare different DNA sequences to see which is more abundant in a sample. Whereas Southern blotting is labor intensive and requires a large amount of high-quality DNA, real-time PCR has several advantages including easier automation, higher throughput screening, and a lower requirement for the amount of DNA used saving the researcher both time and resources (3). Still, researchers generating transgenic animals may choose Southern blotting to screen founder transgenic animals for the inserted transgene because Southern blots have a lower false positive rate than real-time PCR (4). 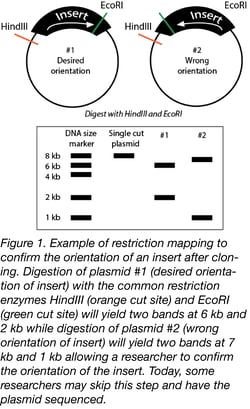 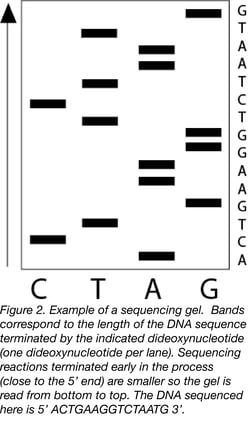 Introduced in 1977, Sanger sequencing, also known as chain-terminating or dideoxy sequencing, was a major breakthrough for determining the order of nucleotides in a string of DNA (7). Sanger sequencing uses modified nucleotides, called dideoxynucleotides (ddNTPs), lacking the 3’ hydroxyl group required for the extension of a DNA strand (8). Adding a small amount of a single radiolabelled ddNTP to a synthesis reaction along with all four regular nucleotides results in the synthesis of DNA strands of all possible lengths because extension is terminated upon the incorporation of a ddNTP. Researchers perform four different reactions, one for each radiolabelled ddNTP, and then run these reactions out in separate lanes of a gel. Since the sequencing gel will separate the DNA based on size, the resulting gel should ultimately contain radioactive bands that correspond to every nucleotide in your DNA sequence, based on which ddNTP was added and when. Compiling the identity and location of a given nucleotide, a researcher (or a simple computer program) can then reproduce the DNA sequence (Figure 2).

Accuracy and accessibility led to the widespread use of Sanger sequencing. Building upon this technology, radiolabelled nucleotides were replaced with fluorescently labeled ones allowing for fluorometric-based detection. This increased sequencing speed ultimately leading to what are generally considered first generation DNA sequencing machines (9). Today, similar technologies, sometimes referred to as sequence DNA as it synthesized by electronically recording fluorescence activity as fluorescently labeled nucleotides are incorporated, a method called pyrosequencing.

The drive for faster, higher throughput and less expensive sequencing fuels a sequencing revolution that still prevails. Sequencing whole genomes or profiling transcriptomes (RNAseq) require sequencing of many samples at once for later comparison. These next-generation sequencing techniques do not typically rely on Sanger sequencing but instead use methods like pyrosequencing that are parallelized to sequence thousands of reads at the same time. Other applications of sequencing, such as confirming the results of a cloning experiment, require only one or a few sequencing reactions and may use Sanger sequencing.

Looking to the future

Southern blotting, restriction mapping and sequencing gels are classic techniques that allowed for many seminal scientific discoveries (5, 8). While newer techniques have largely replaced these, these techniques still have useful applications and have informed many current techniques. For example, restriction mapping led to recombinant DNA technologies that are now commonplace in laboratories.

As scientific technologies rapidly progress, some common lab techniques we use now may soon become obsolete. For instance, the popular genome-engineering tool, CRISPR, may one day make techniques used to generate transgenic mouse lines, such as BAC transgenic or traditional knockins/knockouts, a thing of the past. In the sequencing world, one up and coming innovation is nanopore-based DNA sequencing which reads the nucleotides of a DNA strand as it slips through a tiny pore by measuring differences in ion flow caused by the different electrochemical properties of nucleotides (8). Compared to older technologies nanopore-based DNA sequencing machines are relatively small meaning that DNA sequencing could move from sequencing cores to individual labs and even out into the field. Current versions are already commercially available although they are reported to have high error rates (10). It is projected that nanopore-based sequencing technologies could one day sequence an entire genome for under $1,000 (10). The future of sequencing should bring efficient, low cost methods for sequencing large amounts of DNA quickly and accurately.

We're sure to see many improvements in a variety of biological technologies as both time and research progress. These will bring faster, higher throughput, and potentially more accurate techniques to the hands of biologists throughout the world. Let us know your favorite "Historical Lab Technique" in the comments section below!

Krissy Lyon is a PhD candidate in Neuroscience at Harvard University currently studying the serotonergic system and behavior.