RNA-editing Cas13 enzymes have taken the CRISPR world by storm. Like RNA interference, these enzymes can knock down RNA without altering the genome, but Cas13s have higher on-target specificity. New work from Konermann et al. and Yan et al. describes new Cas13d enzymes that average only 2.8 kb in size and are easy to package in low-capacity vectors! These small, but mighty type VI-D enzymes are the latest tools in the transcriptome engineering toolbox.

How were Cas13d enzymes discovered?

Microbial CRISPR diversity is impressive, and researchers are just beginning to tap the wealth of CRISPR possibilities. To identify Cas13d, both groups used very general bioinformatic screens that looked for a CRISPR repeat array near a putative effector nuclease. The Cas13d proteins they identified have little sequence similarity to previously identified Cas13a-c orthologs, but they do include HEPN nuclease domains characteristic of the Cas13 superfamily. Yan et al. proceeded to study orthologs from Eubacterium siraeum (EsCas13d) and Ruminococcus sp. (RspCas13d), while Konermann et al. characterized orthologs from “Anaerobic digester metagenome” (AdmCas13d) and Ruminococcus flavefaciens (nicknamed CasRx), as well as EsCas13d.

Like other Cas13 enzymes, the Cas13d orthologs described in these papers can independently process their own CRISPR arrays into guide RNAs. crRNA cleavage is retained in dCas13d and is thus HEPN-independent. These enzymes also do not require a protospacer flanking sequence, so you can target virtually any RNA sequence! In bacteria, Cas13d-mediated cleavage promotes collateral cleavage of other RNAs. As with other Cas13s, this collateral cleavage does not occur when Cas13d is expressed in a mammalian system.

Since Cas13d is functionally similar to previously discovered Cas13 enzymes - what makes these orthologs so special? The first property is size - Cas13d enzymes have a median length of ~930aa - making them 17-26% smaller than other Cas13s and a whopping 33% smaller than Cas9! Their small size makes then easy to package in low-capacity vectors like AAV, a popular vector due to its low immunogenicity. But these studies also identified other advantages, including Cas13d-specific regulatory proteins and high targeting efficiency, both of which are described below. 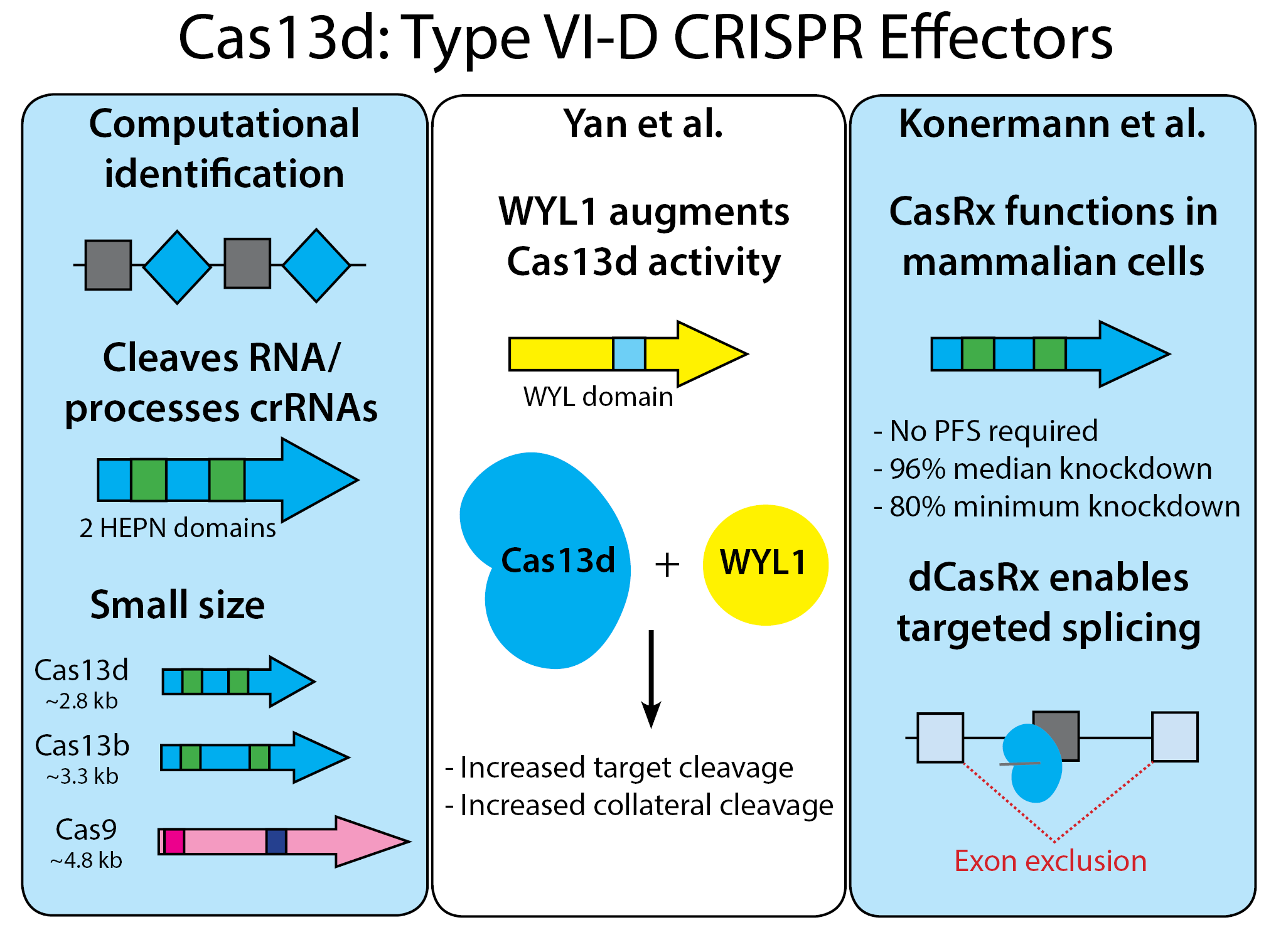 Not all Cas13d proteins are functional in mammalian cells, but Konermann et al. saw great results with CasRx and AdmCas13d fused to a nuclear localization signal (NLS). In a HEK293 mCherry reporter assay, CasRx and AdmCas13d produced 92% and 87% mCherry protein knockdown measured by flow cytometry, respectively. Cas13d CRISPR array processing is robust, with CasRx and either an unprocessed or processed gRNA array (22 nt spacer with 30 nt direct repeat) mediating potent knockdown. Multiplexing from the CRISPR array yielded >90% knockdown by CasRx for each of four targets, including two mRNAs and two nuclear long non-coding RNAs.

One interesting twist to Cas13d enzymes is their cleavage pattern: EsCas13d produced very similar cleavage products even when guides were tiled across a target RNA, indicating that this enzyme does not cleave at a predictable distance from the targeted region. Konermann et al. show that EsCas13d favors cleavage at uracils, but a more detailed exploration of this cleavage pattern is necessary.

The identification of Type VI Cas13d enzymes is another win for bioinformatic data mining. As we continue to harness the natural diversity of CRISPR systems, only time will tell how large the genome and transcriptome engineering toolbox will be. It is, however, certain that the impact of CRISPR scientific sharing will continue to grow, and we at Addgene appreciate our depositors for making their tools available to the broader community.

Additional Resources on the Addgene Blog: