mNeonGreen is a yellow-green fluorescent protein that was derived from the tetrameric yellow fluorescent protein (LanYFP) from the marine invertebrate Branchiostoma lanceolatum in 2012. Using structural modeling and structure-guided direct evolution, Nathan Shaner and colleagues from The Scintillon Institute, Allele Biotechnology, Florida State University, Indiana University, and the Karolinska Institute developed mNeonGreen via 21 substitutions to LanYFP and the addition of the enhanced GFP (EGFP)-type termini. 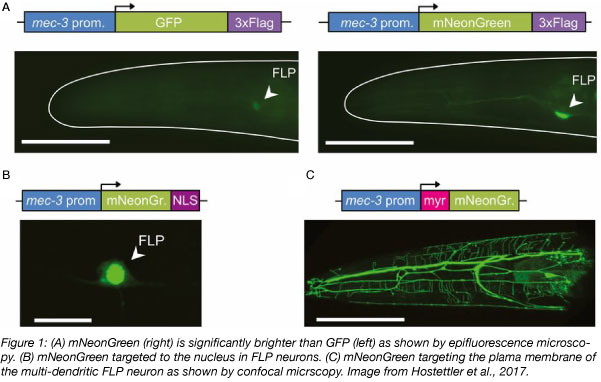 mTPF1 is a monomeric version of the tetrameric cyan fluorescent protein from the coral Clavularia sp. protein CFP484. Hui-wang Ai and colleagues from the University of Alberta and University of Oregon created mTFP1 by transforming E. coli with a gene library of approximately 484 variants, including some potential tetramer-breaking mutations. The library was then screened through successive rounds of mutagenesis for the brightest teal fluorescent proteins that were photostable and had a high 480/530 nm emission ratio. They arrived at a protein which had a total of 31 amino acid replacements relative to CFP484. Because the excitation and emission maxima were red-shifted (462 nm and 492 nm, respectively), they gave this a teal classification rather than cyan and named the protein mTFP1.

The researchers recommend using mTFP1 with a 445/30 nm excitation filter, a 470 nm beamsplitter, and a 495/30 nm emission filter. This combination results in a 2.6-fold increase in signal relative to mCerulean imaged with a standard CFP set. mTFP1 can be used as a FRET donor to mCitrine and mOrange or for live cell imaging of fusions and FRET reporters. mTFP1 is also insensitive to physiologically relevant changes in pH.

The team that developed mTFP1 further sought to identify why this protein was blue-shifted compared to its parent protein CFP484. Collaborating with scientists from Florida State University, they used a mutagenesis approach and found that specific amino acid changes favored blue-shifting more than others. During this process, they identified mWasabi, a bright, monomeric green fluorescent protein.

In vitro, mWasabi is 1.6-fold brighter than EGFP and is photostable. It also has narrow excitation and emission peaks (max excitation at 493 nm and max emission at 509 nm), making it useful in multicolor labeling particularly with fluorophores that excite in the violet range. For example, mWasabi can be used with Sapphire (excitation maximum 399 nm) because it does not significantly excite at 400 nm while EGFP does.

We hope this blog post helped you see why certain fluorescent proteins are best suited for certain studies. If you have plasmids containing mNeonGreen, mTFP1, or mWasabi that you would like to share with the scientific community, please deposit the plasmids at Addgene!