By now you have probably heard about Addgene’s viral service but did you know that Addgene also performs independent research? Since launching the viral service in 2016 Addgene’s research team has been actively investigating ways to improve viral vector production. Whether redesigning viral packaging plasmids, investigating different viral production strategies or developing novel methods for data analysis, our team’s goal is to provide scientists with new tools and protocols that they can easily incorporate into their own labs. This week we are pleased to announce the submission of the results of our first study which can be accessed here at bioRxiv.

When packaging adeno-associated viral vectors (AAV) not all serotypes are equal; while some serotypes are typically high yielding, for others, such as AAV2, low yields are the norm. In the case of AAV2 this is thought to be due to the viral particle’s affinity for heparan sulfate proteoglycans on the surface of the packaging cells (Vandenberghe, 2010). Rather than being released into the cell culture supernatant, the viral particles associate with the cell membrane and are taken into the cell via endocytosis. In our study, we aimed to prevent the uptake of AAV2 viral particles by our packaging cells by treating the cells with the endocytosis inhibitor sucrose.

Previous work by Stoneham et al. demonstrated that the entry of AAV2 into target cells is blocked following sucrose treatment. Moreover, several reports have shown that cells treated with sucrose or other osmolytes to induce hypertonicity display enhanced monoclonal antibody production (Oyaas, 1989; Ozturk and Palsson, 1991; Oh, 1993) and increased yields in adenoviral (Coroadinha, 2006) and retroviral production systems (Shen, 2011). To our knowledge the effect of hyperosmolarity on AAV production yields had yet to be examined. 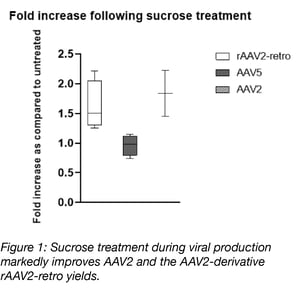 In our study we observed that low doses of sucrose improve AAV2 yields approximately 1.8-fold without affecting cell viability. This effect appears to be serotype specific as sucrose treatment also improved yields of the AAV2 derivative, rAAV2-retro, but had no effect on AAV5 yields. We further show that this effect is not specific to sucrose, but can be adapted to other sugars such as sorbitol. As sorbitol is already a common excipient in AAV formulation buffers, this sugar may be a more attractive choice for labs looking to improve their AAV yields. Given the wide range of downstream applications scientists rely on our AAV preparations for, we wanted to be certain that this supplementation strategy would have no effect on the purity or infectivity of the final viral preparation. Through sugar detection assays, in vitro transduction, and silver stain approaches we show that there is no difference in purity or infectivity between the untreated and sucrose treated viral preparations.

Despite observing a positive effect on our overall yield, we were unable to demonstrate that these results were, in fact, due to impaired endocytosis. In parallel assays designed to test the endocytosis of a fluorescent dye and transduction of GFP-expressing AAV particles we did not observe any difference between untreated and sucrose treated cells. Although we were unable to deduce the mechanism responsible we still believe that these results will be beneficial to the research community.

So, why are we so excited? For starters, we believe that this approach can be adapted by vector cores and laboratories alike as an easy and inexpensive method to improve AAV yields. Although we only investigated 3 serotypes it’s possible that this approach will be beneficial for a host of other AAV serotypes; it will be exciting to test this approach with different capsids. Most importantly, because our AAV yields are improved we will be spending less time and resources resupplying our current inventory and more time providing new materials to the research community. Additional resources of the Addgene blog