This post was contributed by Kusumika (Kushi) Mukherjee, editor of Trends in Pharmacological Sciences, a Cell Press reviews journal. 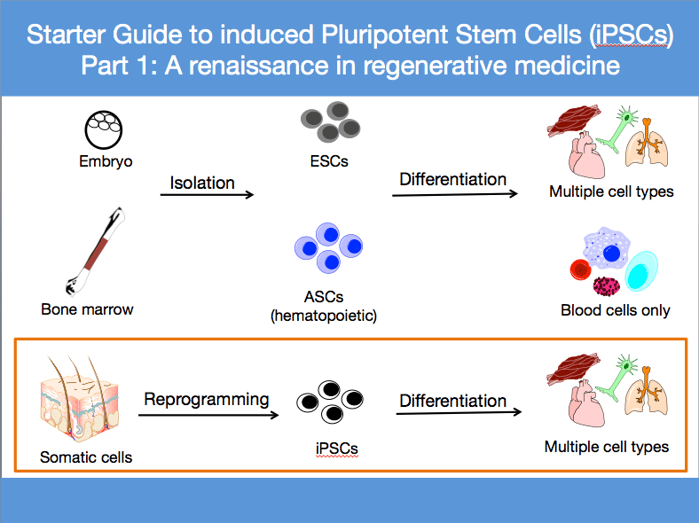 Stem cells are special types of cells that can develop or “differentiate” into more specialized cells with specific functions [1]. In many tissues, stem cells serve to replenish/replace damaged cells that no longer function adequately [1]. Stem cells’ ability to differentiate into multiple cell types makes them useful models for developmental processes and promising therapeutic tools. The two unique characteristics that define stem cells are:

We general speak of 4 levels of stem cell potency:

Stem cells are classified into two broad types according to their source:

ESCs are pluripotent stem cells that are able to form all adult cell types and are obtained from the inner cell mass (ICM) of a 5-6 day old human blastocyst [6]. They are isolated mostly from abnormal and/or supernumerary preimplantation embryos that are produced during in vitro fertilization treatments and donated afterwards for ESC research purposes, with the informed consent of the donor [7].

Also known as somatic stem cells, these multipotent stem cells are located in small quantities in specific “stem cell niches” found in many organs in the adult human body. These generate specialized cells for their location, mostly to maintain cell numbers or replenish dying cells. For example, hematopoietic stem cells found in the bone marrow only differentiate into cells of peripheral blood. Typically, there is a very small number of ASCs in each tissue and once removed from the body; their ability to self-renew is greatly diminished.

Embryonic and adult stem cells can be used for different research and therapeutic purposes. Both types have their advantages and disadvantages. Here is a table listing some of them:

For many years, ESCs or ASCs were the only realistic options for scientists working in regenerative medicine, but the longing for a model system which combined the advantages of both while limiting disadvantages led to the creation of induced pluripotent stem cells or iPSCs.

iPSCs are stem cells that are obtained by reprogramming differentiated adult cells by the ectopic expression of four embryonic genes- OCT4, SOX2, KLF4, and C-MYC. iPSCs were first generated from mouse fibroblasts in 2006 in Shinya Yamanaka’s lab, where the reprogramming factors were delivered via retroviral infection [8]. The work was taken forward the next year when both the Yamanaka and Thomson labs showed the successful generation of human iPSCs from dermal fibroblasts via retroviral and lentiviral infections respectively [9, 10]. These stellar works led to a Nobel Prize for Dr. Yamanaka in 2012.

iPSCs and ESCs closely resemble each other in many aspects. Like ESCs, iPSCs have a high self-renewal rate and can be used universally to generate many adult cell types. Like ESCs, iPSCs can differentiate in vitro into derivatives of all three germ layers, form embryoid bodies, and form teratomas [11]. iPSCs also possess similar morphologies, growth properties, and express stem cell markers similar to ESCs [11].

While iPSCs and ESCs have similar functional utility, iPSCs bypass the transplantation compatibility issues and ethical concerns of ESCs. As iPSCs can be sourced directly from a patient’s adult cells when used therapeutically, the chances of post-transplantation rejection are low. Further, as iPSC generation does not require embryos, their use skirts issues surrounding the use of embryos in research. With all these benefits, iPSCs have increasingly become the ideal experimental system for research in regenerative medicine over the last decade.

In the next post of this series, we’ll discuss the two widely used approaches of somatic cell conversion: conversion via iPSC formation, commonly referred to as reprogramming and, direct conversion from one somatic cell type to another, also known as transdifferentiation.