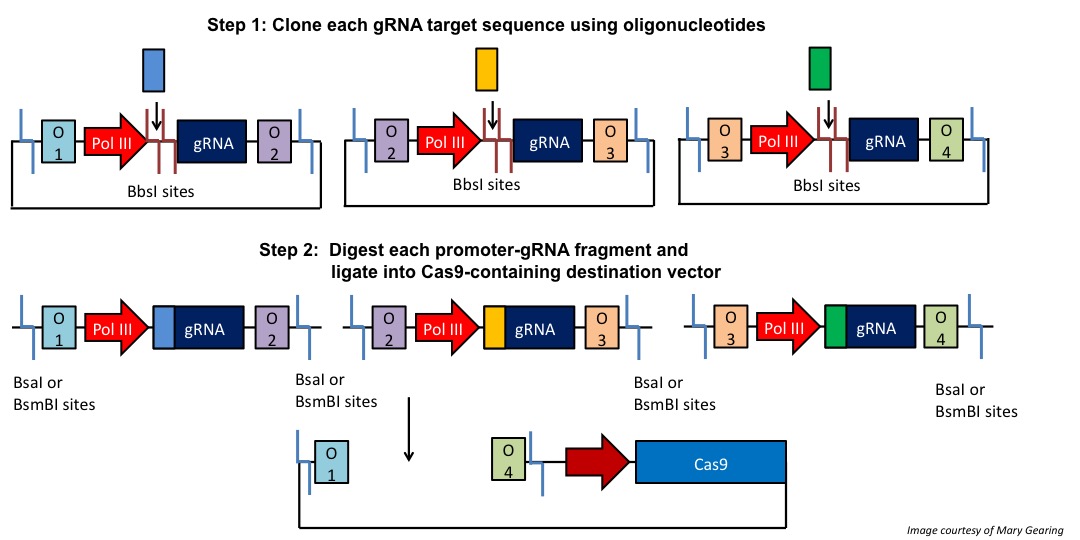 CRISPR makes it easy to target multiple loci - a concept called multiplexing. Since CRISPR is such a robust system, editing or labeling efficiency doesn’t usually change when you add multiple gRNAs. Sound good? Addgene has many tools to help you multiplex - we’ll use mammalian plasmids to introduce you to some of your potential options and cloning methods, but please scroll down for plasmids suitable for other model systems, including E. coli, plants, Drosophila, and zebrafish!

END_OF_DOCUMENT_TOKEN_TO_BE_REPLACED In the short time since its development, CRISPR/Cas9 genome editing has been used to study the effect of gene knockout in vivo and in vitro, as well as to insert targeted mutations through homologous recombination. To further increase the utility of CRISPR/Cas9, it will be necessary to improve its multiplexing capacity. Multiplexing is key due to the natural redundancy of biological pathways;  to observe a phenotype, the modification of multiple genes is often necessary.

Guide RNAs (gRNAs) are commonly packaged in 400-500 bp cassettes containing the RNA pol III promoter, gRNA and pol III terminator. These relatively large cassettes (considering the gRNA itself is ~100 bases) limit the number of gRNAs that can be packaged together in a single vector. In addition, the pol III promoter is relatively weak, and low expression of gRNAs from these constructs could lower genome editing efficiency.