The 10 Most Distributed Plasmid Technologies in Addgene's First 10 Years 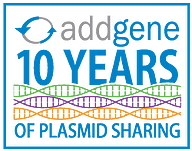 Addgene was founded 10 years ago today. In that time, Addgene has shipped over 350,000 individual plasmids to 5,000 different research institutions. This has given us a unique window into technology trends in the life sciences.

In this post, we'll give you an inside look at the Top 10 plasmid technologies distributed through Addgene over our first 10 years.

It's been a challenging and rewarding journey since starting Addgene. Thank you for inspiring us with your breakthrough research and your commitment to scientific sharing.

In the coming years, we will continue to improve our services and work to make sharing even easier. We can't wait to see what you put on the next Top 10 list.

Interested in more facts about Addgene's 10 years of plasmid sharing? Check out this infographic created by our own Addgenie, Laura Veckerelli. Click on the picture below to see the full graphic. 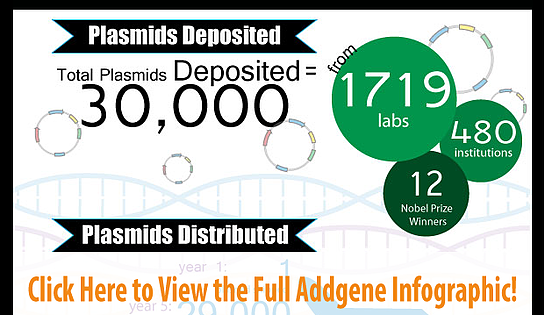