Since the first research applications of GFP were published in the 1990s, biologists have spent a lot of time making things glow. Chances are you’ve used a GFP derivative to conduct subcellular localization studies or make a reporter construct. Fluorescent proteins (FPs) are also the foundation of multiple important technologies, including FRET and optogenetics. Even though GFP has been so thoroughly characterized, it turns out this protein has a few more secrets - during a collaboration, members of Maureen Hanson’s and Rima Menassa's labs made the accidental discovery that laser treatment can photoconvert GFP from green to RED! This simple technique has been shown to work in plant, Drosophila and mammalian cells, and it may find wide use in biological research.

Newly developed photoconvertible FPs like PsMOrange and mEos add another layer of complexity to imaging, as they allow one to monitor compartment/protein dynamics or evaluate protein turnover rate. In many cases, however, a GFP-tagged cell line or organism has already been made, and it would be expensive and time-consuming to repeat the process with these new photoconvertible proteins. With Sattarzadeh et al.’s discovery that GFP itself is photoconvertible, new studies of spatiotemporal dynamics can be undertaken using available GFP lines.

Like many great scientific discoveries, this one was made by accident. After exciting GFP-labeled plant cells at 405 nm instead of 488 nm, Sattarzadeh et al. noticed that GFP had turned red. They subsequently confirmed that purified GFP could be imaged in the green state after excitation at 488 nm, photoconverted with 405 nm light, and then captured in the red state after excitation at 561 nm. This imaging process worked well with the common GFP variants EGFP, mGFP4-T, and S65T GFP, and no red color was observed after excitation at 488 nm, indicating that spontaneous conversion did not occur. 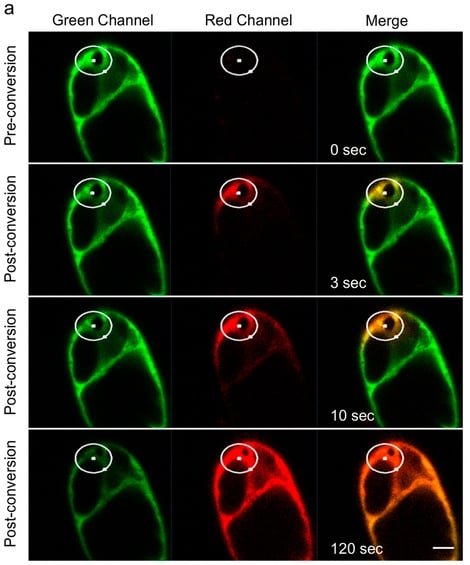 Applications and limitations of GFP photoconversion

One concern with photoconverting GFP is the expression level necessary to observe a signal. Red signal intensity increases with GFP concentration and saturates around 30 uM. For low-abundance GFP fusions, a photoconversion signal may not be observed. Sattarzadeh et al. found that only the protonated form of GFP is photoconverted, so this technique may not be appropriate for high-pH cellular compartments.

Sattarzadeh et al. have shown that GFP can be rapidly and efficiently photoconverted in plant, Drosophila, and mammalian cells. Photoconverted GFP is compatible with other FPs since its emission wavelength (612 nm) is distinct from other commonly used FPs, and GFP does not display auto-photoconversion as do some FPs. "While this discovery is likely to be most useful for labs that already have created a transgenic GFP-containing organism,” says Hanson, “using a gene encoding one of the unexpectedly photoconvertible GFP proteins to make a new transgenic line could avoid problems in localization that have been encountered by some investigators when using forms of mEos." The ability to repurpose GFP is great news for microscopy enthusiasts!

Addgene has empty backbones containing GFP variants used by Sattarzadeh et al., as well as a wide variety of other fluorescent proteins for your imaging needs. If you need an FP refresher, see our FP blog posts.