Having never been to China myself, I was pleased to be able to participate when the organizers of the Canton Nucleic Acids Forum (CNAF) 2015 conference invited me to attend and speak about Addgene’s experience helping scientists share plasmids, especially those of the CRISPR variety (see slides from my talk below). Largely organized by Dmitry Samarsky, and a very welcoming team from China’s Ribobio, the illustrious speaker list attracted a host of sponsors based all over the world. With three Nobel Prize winners, one NIH Director and a co-founder of BGI-China presenting, it’s no wonder it was attended by over 300 Chinese scientists eager to hear current findings in nucleic acid science. I was delighted to see that the majority of attendees were scientists still working at the bench. It was a fantastic opportunity to talk to so many scientists who were potential Addgene requestors and depositors. China is in one of the top 10 countries in number of plasmid requests from Addgene.

Thoughts on Guangzhou and the Science City The conference was located in the modern, relatively new “Science City” area on the outskirts of Guangzhouon west of beautiful Mao Fengshan Forest Park. As a national science and technology park, it enjoys preferential governmental policies for a high-tech development zone so many science and technology companies and start-ups choose to locate there. I made time to go into the city of Guangzhou and see some of the sites. Most fascinating to me was the outdoor market where one can shop for components of traditional Chinese medicine. There were hundreds of stalls selling a myriad of items, only a small number of which I could identify. There were dozens of different mushroom varieties alone. At least I could tell that they were mushrooms. In some cases I couldn’t tell if the bags contained flora or fauna. I tried to find out what certain ingredients might be used for (like what would one take dried seahorse for?), but there were no English speakers around. 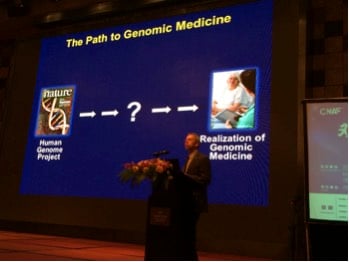 Eric Green, Director of the National Human Genome Research Institute (NHGRI) of the NIH, started off with the first keynote presentation. He talked about the impact of the Human Genome project on its 25th anniversary, how the NIH sees the future for genomics, and President Obama’s Precision Medicine Initiative and how this initiative will lead to advances in human health. It was inspiring to hear how the genome project has already had a major impact on undiagnosed and rare diseases; Before the Human Genome Project, loci were identified for 61 such diseases. Now single gene alleles have been identified for 4,163, over 50% of known rare diseases.

One of the unintended themes of the meeting was how much we still don’t know about RNA. One talk that really brought this home was presented by Todd Lowe from UCSC. Dr. Lowe talked about his work on the 500+ human tRNA genes and, until now, we've overlooked regulatory fragments of these transcripts. I remember when small RNA was just something we ran off the bottom of the gel so it wouldn’t muck up northern blot results and we didn’t give tRNAs much thought. High throughput transcriptome sequencing methods including work done by the ENCODE project consortium did not do a good job of seeing tRNAs because they contain “hard stop” mutations. New techniques used by the Lowe lab have allowed them to begin understanding complex regulation of and by tRNAs and tRNA-derived RNAs. Stay tuned for big developments in this field.

Nobel Laureates and the ever expanding importance of RNA

The second keynote lecture was presented by Nobel Laureate Jack Szostak. Dr. Szostak’s lab continues its work on the origin of cellular life. His lab has long hypothesized that life started with RNA and a simple cell membrane. His recent work shows that they are making fairly remarkable progress on establishing a system for the chemical replication of RNA in the absence of evolved enzymatic machinery (i.e. RNA replication with no proteins). The chemistry is complex and this work requires an interdisciplinary team.

Day two of the conference was kicked off by Nobel Laureate (and Addgene depositor) Craig Mello. Taking his groundbreaking work in RNAi one step further, his lab is now studying how Argonaute pathways may be involved in preventing silencing of self-genes. Dr. Mello presented a hypothesis that these pathways are involved in RNA based surveillance of repetitive gene families and provide a way to guide inheritance that might be less error prone than DNA replication. He too mentioned how “surprising” small RNAs can be and posited that “we underestimate living things.” He further cautioned the distinction of “higher” and “lower” life forms as we shared millions of years of common ancestry with worms before evolutionary divergence.

Nikolaus Rajewsky from the Max Delbruck Center for Molecular Medicine presented another unexpected finding in the regulatory RNA field. The Rajewsky lab is studying circular RNAs (who knew…I had barely heard of these). These single stranded, covalently closed RNAs seem to be conserved in mammals, expressed in neurons, and are especially abundant in neuronal synapses. shRNA silencing of one circular RNA they have identified resulted in a cell migration defect. They have created a circRNA website so scientists can view public circRNA datasets and download the custom python scripts needed to discover circRNAs in RNA-seq data. As far as I can tell, we don’t really know what circRNAs do yet or how they do it.

Of course, No conference would be complete without CRISPR

Michael Terns from of the University of Georgia studies the CRISPR/Cas system as it relates to its natural role in prokaryotic immunity to viral invasion.  His lab is studying P. furiosus, a hyperthermophile that exists in sea vents at the boiling point of water. Dr. Terns gave a great introduction to the repeated and distinct aspects of the CRISPR regions of the prokaryotic genome. Then he desribed how P. furiosus has systems to defend against both DNA and RNA viruses - 2 cas systems regulate at the DNA level and 1 at the RNA level.

Udi Qimron from Tel Aviv University then spoke about using CRISPR/cas to address the growing clinical problem of antibiotic resistant bacteria. See the picture to the left for his list of the bacterial species that “ESKAPE” antibiotic treatment resulting in major problems in hospitals. Dr. Qimron proposes using bacterial phage vectors with CRISPR/cas9 sensitizing gene cassettes. Thse vectors are engineered to replace the drug resistantance genes in the bacteria thus making the bacteria sensitive to known antibotics. These might be used on hospital surfaces and in hand sanitizers.

There are many clever ways labs are using CRISPR/cas9 and more are being reported. Zhou Songyang from Baylor College of Medicine and Sun Yat-sen University presented two new technical developments. Using the Tet-on system, his lab has created a tetracycline cas9 inducible knock-out system. His lab is also exploring the use of cas9 proteins from different species for genome engineering.

The final keynote presentation was by Nobel Laureate Thomas Steitz of Yale. He gave an update on new findings from structural studies on the ribosome performed in his lab. RNA is a structural and functional component of the ribosome complex and Dr. Steitz quipped that RNA in the ribosome is in a complicated conformation “not like DNA which has a boring structure.” That certainly summed up this conference—nucleic acid science still has many surprises for the researchers in this field.