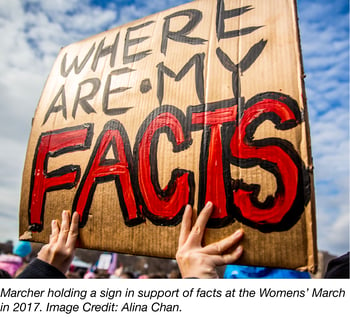 This post was contributed by guest blogger, Stephanie Hays, a scientist with a passion for photosynthetic communities, microbial interactions, and science education.

Disclaimer: The views presented in this article are those of the author do not represent a formal stance taken by Addgene or its staff.

In Washington, D.C. as well as sister locations on April 22, 2017, scientists and non-scientists alike will march to advocate for science’s place in education, government, and civilization in general (1).

Science is an apolitical process for seeking knowledge. The process begins with a testable hypothesis - an educated guess about how some part of the world functions. Experiments come next, testing the correctness of the hypothesis. The results of experiments can help support or reject a hypothesis. Looking at the data, scientists then revise their hypotheses and the cycle begins again. No part of this process is inherently political so why is there a march in Washington, D.C., the seat of the United States government?

Politics and science are intrinsically linked: governments exist in reality and science is how we learn about reality.

Formally, a government can be defined as a social contract citizens enter into in order to protect their rights (2). Less formally, governments are the organizations that make and enforce the rules of the lands we live on.

Rules, however, are limited by reality – a government cannot declare that gravity change direction and make things fly up when we drop them. Scientific realities limit what policy can do and, in this way, science has always been related to government and, consequently, politics. More concretely, scientists gather information about reality informing people and their governments on what outcomes are actually possible for a given policy. In exchange, the government protects (and often funds [3]) scientists as well as other citizens. Thus civilization proceeds in an informed fashion.

For science to be useful to governments, however, inconvenient data must not be ignored. Returning to an earlier analogy, no amount of shouting will make an apple fall up. As scientist and politician Rush Holt said, government must have the same fundamental attribute that enables science: “humility in the face of evidence” (4). Frustration among scientists has been rising as evidence of climate change, the safety of genetically modified organisms (GMOs), the absence of a link between vaccines and autism, and other hypotheses mount yet policies and public opinion do not seem to take note. For example, 91% of active research scientists (scientists who hold a doctorate degree, are currently working full-time, and have received a research grant in the last five years as polled in the American Association for the Advancement of Science) believe GMOs are safe for human consumption in comparison to 37% of the general public (5, 6). Similarly 90% of active research scientists believe climate change is mostly due to human activity while much less of the general public agrees (5, 6).

Many of the new administration’s actions, including taking down the climate change page on whitehouse.gov, freezing grants, and proposing to defund aspects of research at National Aeronautics and Space Agency, the Environmental Protection Agency, and the National Institutes of Health endanger scientists’ ability to uphold their side of the bargain and do the research required to inform the public (8–13). Facing the possibility that reason is losing ground in public discourse, many scientists have chosen to leave the lab and march.

While frustration and anxiety have inspired people to rally for science, others are concerned about possible unintended consequences of a march. Three of these risks include:

Perhaps the greatest risk is that the public will lose trust in scientists if the march highlights data supporting unwanted results (14). Some loss of trust, I fear, has already come to pass. It may only be by advocating for science education and literacy that this changes.

While marchers are a group with one unifying interest (the advancement and inclusion of science) they come from many different places supporting many different positions. It would be detrimental for them to be homogenized or thought of as just another party. Additionally, interest groups are often pandered to when strong or overlooked when small, but data is not going change depending on the number of people supporting it.

While scientists do identify as Democrats more often than Republicans, the March is not about Democrats or Republicans (16). This is a Pro-Science and Pro-Evidence march.

Who is marching and why?

All sorts of people are choosing to march on April 22nd. As of April 13th the March for Science homepage has amassed nearly 500,000 ‘likes’, while their website lists over 200 partner organizations, and 514 satellite marches are scheduled to take place around the world. There is no requirement that marchers or supporters be scientists – on the contrary, anyone and everyone is welcome.

There are many different things scientists and non-scientists alike are marching for. I will be marching to advocate for science education and literacy as I believe people that can see and understand data themselves can come to conclusions themselves instead of depending on scientists or politicians to interpret it for them. Other popular reasons to march include:

This is by no means an exhaustive list and every marcher is not necessarily marching for every cause. The references provided also only provide a snapshot into the opinions or research on each topic.

Resources for marching and advocacy

If the march for science rallies scientists to political action, and inspires politicians and citizens to include science in decision making, it will be considered a success. Below are resources for the march as well as other science advocacy opportunities.

For science to be integrated into politics in meaningful ways, continued conversation about science’s role in government as well as active advocacy will be required.

Senators: To find contact information for your senators all you need to do is select your state.

Finally, the march is meant to inspire scientists to be more involved in their communities (something already encouraged by “Broader Impacts” requirements for certain grants) (28). As one young scientist, Matthew Niederhuber, said, “if the march motivates more scientists to reach out to their communities, to teach, to write, to make art, and to run for office, then in my opinion it will be an outstanding success,”(29). I tend to agree with him.

314 Action: This nonprofit named for the mathematical constant “pi” supports scientists getting involved in politics.

Disclaimer: The views presented in this article are those of the author do not represent a formal stance taken by Addgene or its staff.

Many thanks to our guest blogger, Stephanie Hays. Stephanie would like to additionaly thank Isaac Plant for thoughtful edits.

Stephanie Hays recently received her PhD from the Systems Biology department at Harvard University. She is a scientist with a passion for photosynthetic communities, microbial interactions, and science education.