By A Max Juchheim

Luminescent molecules are very useful tools because we can easily detect and measure the light they emit. Proteins that give off light include chemiluminescent proteins, like luciferases, as well as fluorescent ones, like Green Fluorescent Protein (GFP). These molecules occur naturally in bioluminescent organisms, but their real power lies in the clever ways sceintists have adapted them for use in the laboratory.

The discovery of GFP 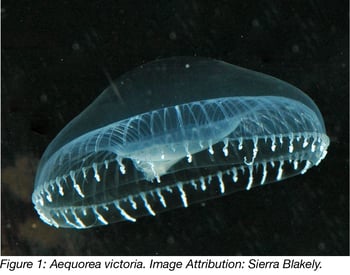 The story of how fluorescent proteins like GFP came to be used as research tools is particularly interesting. Although humans have known about bioluminescent organisms and their characteristic radiance for some time – there are records describing them dating back to the first century A.D. – the first time anyone truly examined what caused this glowing phenomenon wasn’t until much later when, in the 1960s, Osamu Shimomura studied the bioluminescent properties observed in the crystal jellyfish Aequorea victoria (Figure 1) in molecular detail.

On the underside of the “umbrella” of A. victoria there is a ring that glows with a faint green light. To investigate this green glimmer, Shimomura collected many, many jellyfish specimens from Puget Sound in the Pacific Ocean, off of the coast of Washington state. Using these samples, he was able to isolate two proteins from the jellyfish’s photoorgans; the first, which he called aequorin, gives off a faint blue light when it binds calcium ions, and the second, which we now call GFP, absorbs that blue light and glows green.

In the late 1980s, another researcher, Douglas Prasher, got the idea that this new green glowing protein could be used to measure gene transcription, as well as to track protein localization. And as it turns out, he was right! He began to study the A. victoria gene responsible for encoding GFP, and, in 1992, he reported its sequence. Soon after that, in 1994, Prasher’s collaborator Martin Chalfie expressed GFP in exogenous organisms (E. coli, and later C. elegans) for the first time.

After Chalfie’s work, scientists really started to take notice of GFP, and began to realize its potential as a research tool. Soon, the number of people studying it grew. In particular, studies in the laboratory of UCSD biochemist Roger Tsien resulted in much of our current mechanistic understanding of GFP’s function. His lab described the protein’s structure and also discovered many mutations that alter and improve its function and shift its emission spectrum.

Around the same time, researcher Sergey Lukyanov realized that, although they are not bioluminescent, some types of corals and anemones are vibrantly colored. He hypothesized that GFP-like proteins could be responsible and began studying these marine organisms to find the culprits. He even obtained samples of certain ones from local pet shop aquariums in Moscow where he lived! His hunch paid off, and he was able to report new fluorophores like DsRed from Discosoma sp. and Katushka/mKate from Entacmaea quadricolor. With his discoveries, another part of the fluorescent protein puzzle fell into place, as they, taken alongside the insights provided by the studies in Tsien lab, covered a portion of the color spectrum that GFP and its derivatives did not previously reach.

The importance of fluorescent proteins was recognized in 2008 when the Nobel Prize in chemistry was awarded to Shimomura, Chalfie, and Tsien for their work on GFP. This great honor serves to highlight how useful fluorescent proteins like GFP really are. In this compilation we’ll take a closer look at how they’re used, see some new techniques that take advantage of them, and give some tips on deciding which one is right for you, so if you’re interested in learning more about fluorescent proteins, I invite you to download our Fluorescent Protein eBook and learn much more!