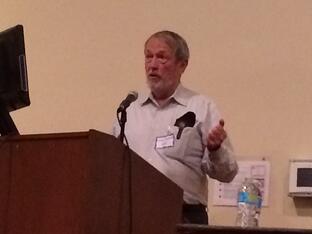 It was with a sense of relief that I attended the amazing, postdoc-driven Future of Research Conference at Boston University last week.  This fantastic city-wide effort was led by two amazing postdocs, Kristin Krukenberg and Jessica Polka from Harvard Medical School and a long list of supporters from all of the research centers in Boston.  I was relieved because it finally feels to me like the postdocs are taking some steps to control their own future in science (see my previous blog on this).  Indeed, that was a primary message delivered by many of the speakers.  As Dr. Polka said as she started things off, “We are all capable of contributing to change.”

The keynote speaker, Dr. Henry Bourne (shown in photo), has been speaking out and writing about issues in our science training infrastructure for some years.  He spoke eloquently and vehemently about the need for change.  Dr. Bourne strongly believes this is an amazing time of promise for science—we have powerful tools, beautiful questions, and smart scientists.  At the same time, he pointed out, academic research has some big problems resulting from past practices and mores.  His list is dire:  The current system is unsustainable, hypercompetition is corroding values, we are shifting away from PI driven basic research, there is resistance to change, public support is weak, government support is “feckless”.  So what can be done?  He charged the postdocs to “Grab ahold of your destinies” and also suggested some concrete actions that can be taken now to solve some of the more “tractable” problems.

We must better define the postdoc (and even the grad student) trainee experience and how it feeds into a workforce.  The soft money system needs to be addressed.  We should tackle the issues with rules and practices of indirect costs.  The peer review and grant awards systems need to be radically overhauled.  Finally, the science publishing system needs to be changed.  Dr. Bourne charged the audience to use their useful energy and to choose institutions with allies engaged in training excellence to begin effecting change.

Each of the speakers in the panel had interesting words of experience and encouragement.  Dr. Sibby Anderson-Thompkins, Director of the Office of Postdoctoral Affairs at UNC, called her presentation “Disequilibrium, Disillusion and The Postdoc Dilemma” which pretty much said it all.  She cited the oft quoted statistic that only 15% of current postdocs will be academic principal investigators. She also pointed out promising new practices such as new training programs (like at the Keck Graduate Institute), funding for training (such as the NIH BEST award) and availability of career tools (such as the National Postdoc Association Core Competencies and the Science Careers’ myIDP).

Dr. Galit Lahav, Associate Professor of Systems Biology at Harvard Medical School, titled her presentation “How to Train Your PI”.   She focused her talk on the issues involved with the fact that the PhD and Postdoc advisors only know about academia and alternate training needs to be provided to take advantage of all the possible science careers. She advocated for increasing the value and priority put on good mentoring and applauded the new requirement for PIs to include in their annual NIH progress reports information on the Individual Development Plans (IDPs) for the graduate students and postdocs in their labs.

Dr. Richard Roberts, CSO of New England Biolabs, gave examples of how you don’t have to be in academia to make change.  He talked about his own unique way of funding basic research at NEB and got some applause when he talked about how he boycotts publishing in all but open access journals.  Dr. David Glass, Global Head Muscle Diseases at Novartis, opened with a discussion of the Novartis industry postdoctoral program.  His strongest comments were about the astounding lack of reproducibility being recognized in published work even in the “best” journals.  He pushed for drastic change in the way we train scientists to start addressing this problem.  Finally, one point made by Dr. Graham Walker, Professor of Biology at MIT, was the need to pay postdocs more. 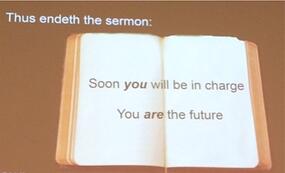 What will the future of research be?

The second day of the conference included workshops which were framed in advance by the conference organizing team.  The topics were Training, Structure of the Workforce, Metrics and Incentives and Funding.  I can’t wait to see what solutions these talented postdocs will come up with to push for change in their opportunities.  Scientists must do science to be happy so the beginnings of solutions can’t come too soon.  Watch the Future of Research Website for news and updates on the outcomes.  Join the conversation and take action.