From Addgene Book Club to our on-site book swap/library, reading is part of the culture here at Addgene. Since it’s National Book Month, we’ve asked some Addgenies to share their favorite books - both scientific and not - to inspire you to read a little more this October.

Musicophilia: Tales of Music and the Brain by Oliver Sacks

"Neurologist Oliver Sacks examines the relationship between the human brain and music: how we perceive it, why it affects our emotions, and even what therapeutic properties it has. As with other works of Dr. Sacks, Musicophilia includes case studies of relevant neurological atypicalities, including a patient with amusia - the inability to perceive music as anything but noise. As a psychology major and a musician, I found myself rapt by this book! Far from a work of glib pop psychology, Musicophilia is accessible and fascinating, all without compromising on the relevant science."
- Randall Carter, Contracts Administrator

Inferior: How Science Got Women Wrong - and the New Research That's Rewriting the Story by Angela Saini

"This book is a smart and carefully presented case for better more diverse science. It's a series of case studies in what happens when scientists bring biases to research and don't collaborate with others to bring diverse perspectives. Everyone should read this book! Bonus, Saini's following book Superior: The Return of Race Science is a terrifying and equally good wake up call about the science of race."
- Joanne Kamens, Executive Director

I Contain Multitudes by Ed Yong

"Microbes are everywhere and this book emphasizes the important roles microbes play in our ecosystem, examining relationships between microbes and insects, mammals, and plants, among others. I particularly enjoyed the emphasis that microbes are neither bad or good - they're just exist and sometimes we benefit and sometimes we don't."
- Jennifer Tsang, Science Communications and Marketing Coordinator

The Mistborn series by Brandon Sanderson

"The Mistborn series is the first 3 books of a larger epic of fantasy novels. Set in a world where 1000 years ago the hero lost and the Dark Lord rules all, the books center around a cast of endearing characters who decide to take matters into their own hands. Who doesn’t love a book series that features a young female protagonist, some clever magic, and a satisfying conclusion? In this series, there is always another secret."
- Marcy Patrick, Associate Director of Quality Control

"A quasi-historical/fantasy fiction. Two dueling magicians in the 1800s in England who help bring back actual magic (which had been lost for an age) fight in the Napoleonic Wars and against something even more sinister. 1000 pages long. Incredibly imaginative, funny, bittersweet, and shocking at times."
- Jason Snair, Product Designer

Sarum: The Novel of England by Edward Rutherfurd

"A 10,000 year history of southern England. While the length may be intimidating, Ruthefurd’s writing will capture the attention of even the most skeptical reader of historical fiction (I can personally attest to this!). Following history from the Ice Age to the 1980s, Sarum follows an intriguing cast of characters from five different families over several millennia as their paths cross with each other and with the events of the times."
- Aliyah Weinstein, Marketing and Communications Manager 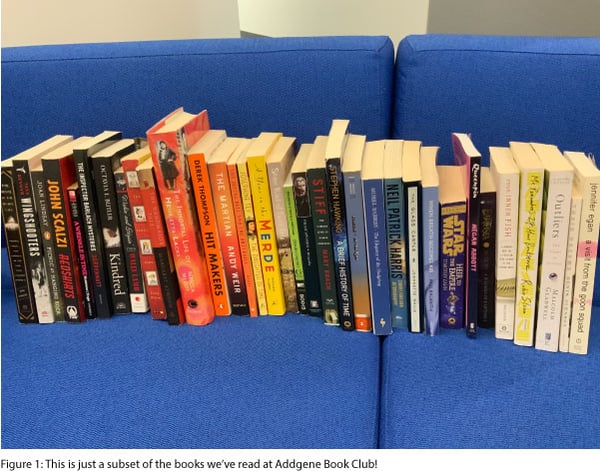 Indeed, reading is ingrained into Addgene’s culture. We have a book club in the office that was founded back in 2011 and is still going on today! Addgene Book Club (ABC) founder, Eric Perkins, is Addgene’s Director of Science Product Management and explains the origins of ABC:

I founded the Addgene Book Club (aka ABC) in 2011 after having numerous conversations at the lunch table with other book-loving Addgenies. I’d never participated in a book club before, but I had a few reasons for launching this one. On a purely selfish level, I wanted to be challenged to read some books outside of my comfort zone. I’d been in a bit of a reading rut, and I felt a book club would force me to read some books exploring new genres, new authors, and new themes. A book club would also be a great way to level the playing field for our scientists and non-scientists. It wouldn’t matter whether you had a bachelor’s degree or a PhD, majored in Biochemistry or International Finance. A book club could lead to smart, sometimes contentious, discussions.

I presented the first book, Nicholson Baker’s The Anthologist. The book ended up literally changing my life. Though I have an undergraduate degree in English, I had lapsed. Baker’s novel reignited my appreciation of poetry, and I’ve been reading a poem a day for the last 8 years. Since then, we’ve read books across nearly every genre you can imagine: gothic, mystery, sci-fi, fantasy, pop-sci, true crime, and so on. We’ve read well-known classics, like Austen’s Pride and Prejudice, and some more obscure treasures, like Tove Jansson’s The True Deceiver. There have been books that most of the group really disliked, some that everyone loved, and some that ran the spectrum. I recently presented Kurt Vonnegut’s Slaughterhouse-Five, and the responses ranged from “one of my favorite books” to “I barely got through it.”

To date, we’ve read 76 books for ABC. Some are easy reads, some are hard. Some I’ll never think about again, some I loved so much I’ll force them on everyone I know. I am, of course, pretty biased as the founder, but our book club has become one of my favorite parts of Addgene’s culture.

Have you read any of these books? Whether you have or not, let the Addgene community know what your favorite book is in the comments!