All living cells with a membrane possess an electrical state. This state, known as the resting potential (Vmem), can be measured as the imbalance of electrical charge between the inside and the outside of the cell. This imbalance is maintained by ion channels and pumps in the membrane. An emerging interdisciplinary field of biology known as bioelectricity is revealing the important role of bioelectrical signaling mediated by ion-channels and pumps in developmental biology, regeneration studies, and cancer biology.

I was first introduced to bioelectricity when I attended the Developmental Bioelectricity satellite symposium at the 2019 Society for Developmental Biology meeting in Boston. The atmosphere was electric! After attending this meeting I had an increased appreciation for the role of ion channels and pumps in developmental biology.

Examples of some ion-channel and ion-pump encoding genes

There is mounting evidence that signaling via ion channels and even between many cells (through gap junction proteins which connect the cytoplasm of two cells) can also affect patterning and in some cases even override genetically encoded patterning. Based upon trends in studies over the past several years, it seems that the more polarized (negative) the action potential of a cell, the more differentiated and quiescent it is, and the more depolarized (positive) the cell is, the more embryonic, stem cell-like, or cancerous it is (Levin et al., 2017). These states can even be necessary and sufficient for certain patterning activities of entire tissue types or even organs. In frogs, ectopic expression of ion channels, despite having an otherwise normal genomic background, can even lead to the formation of whole eyes from cell types that don’t typically give rise to eyes (Pai et al., 2011).

Additionally, researchers have reprogrammed regenerating tissues without using genome engineering. Planarian worms cut into three segments “remember” which side should grow a head and a tail, and when gap junction-mediated electrical communication is briefly inhibited in the entire worm during regeneration, the worm creates two heads. Subsequent cutting results in a two-headed worm, despite the fact that it’s genetically wild type  (Oveido et al., 2010). 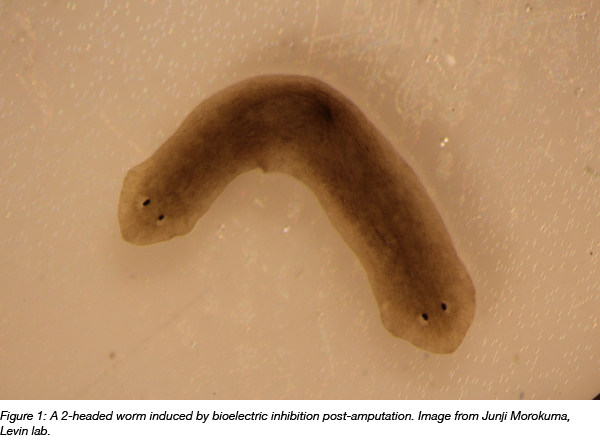 One of the challenges of studying bioelectricity is that it can be hard to visualize or perturb these slower-changing bioelectric states in living cells. Since bioelectrical signals are controlled by the opening and closing of ion channel proteins, they are not always easy to track at the transcriptional or translational level. However, several genetic tools have been developed to address these hurdles.

For example, the Levin lab from Tufts University has used Arch (green-light activated proton pump) and ChR2 (blue-light activated cation channel) light-activated channels to hyperpolarize tumor cells, which resulted in tumor regression in a frog model (Chernet et al., 2016). There are many other light-based genetic tools for studying bioelectricity in vivo.

Here are some optogenetic and GEVI tools (as discussed in Mathews and Levin, 2018) available at Addgene: 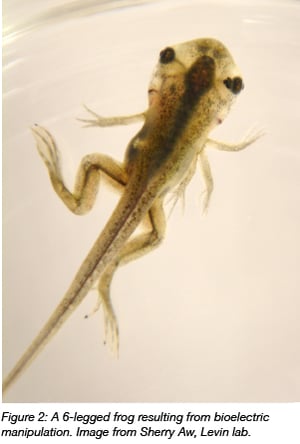 Other resources from the bioelectricity field

In addition to sharing tools to study bioelectricity, bioelectric researchers in many different fields came together to found the journal Bioelectricity in 2019 with a goal to broaden this field of research to the whole scientific community.

Over the years, developmental biologists and cancer researchers are beginning to turn their attention to bioelectricity. One such group, the Allen Discovery Center at Tufts University, studies how bioelectrical signals affect pattern memory and decision-making in somatic cell networks. “Developmental bioelectricity is an extremely exciting emerging field, with many implications for regenerative medicine, evolution of body plans, synthetic morphology, and even artificial intelligence," says Michael Levin, Director of the Allen Discovery Center. The future of this field has a high potential for the advancement of research in birth defects, regeneration, medicine, and synthetic bioengineering.