Addgene Welcomes John Doench to the Advisory Board 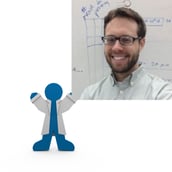 The Addgene Advisory Board consists of prominent members of the bioscience and tech transfer communities who help guide and promote Addgene in its mission to make research easier. Addgene is excited to announce that we’ve added John G. Doench, PhD to the Advisory Board. John Doench is Associate Director of the Genetic Perturbation Platform at the Broad Institute and has worked with many Addgenies to help improve the understanding, curation, and explanation of our CRISPR resources. We recently sat down with Dr. Doench for an interview to help further introduce him to the Addgene community.

Listen to the interview here!

Doench majored in history during his undergraduate work at Hamilton College. When asked about what got him into science, Doench explained:

“I took a microbiology class my sophomore year and it was the first time that I was in a lab class where we had an assignment that was open ended... it was actually something bordering on research, rather than 'here’s the protocol, get a result and hope it’s close to the right answer because if it’s not, well, your grade is lower.' ... When you are waking up on a Saturday at like 7 am to go check your plates and you’re excited to do so, you know that that’s the thing for you.”

After recognizing his love for science and later realizing that he wanted to continue doing research, Doench went on to apply to graduate school at MIT. Doench excitedly remembers:

“When I came to MIT to interview, part of the interview process was several short talks by current faculty members and it just blew me away….  I have to come here, I need to spend time here, this is an incredible place.”

Doench has spent most of his research career working on miRNAs and RNAi. He first heard about RNAi at his MIT interview during a lecture given by Phil Sharp. After a few rotations, Doench decided to complete his PhD work in Sharp’s lab.  Doench says, “what I loved about [RNAi], ... it was just this complete black box. The RNAi process had just been discovered, the mechanism was barely understood.”

Doench’s graduate work helped expand our understanding of how miRNAs regulate their targets and what confers specificity in the miRNA regulatory process. This early research is still relevant to his work at the Broad Institute today, where he helps researchers in a variety of fields develop RNAi screens to answer their own research questions.

Starting at the Broad Institute

For his post-doc, Doench worked on using RNAi screens to learn more about cancer biology in Ed Harlow’s group at Harvard Medical School and then applied to work at the Broad Institute:

“The model that the Broad was building that had Platforms with a capital ‘P’ focused on technology ... has been critical to the Broad’s success over the last 11 years and was certainly critical to drawing me towards the Broad. In order to ask interesting biological questions, you need a tremendous amount of technology development alongside it.”

Doench starting working with David Root in the then RNAi Platform, which has since evolved into the Genetic Perturbation Platform and encompasses a variety of technologies to functionally investigate the human genome. Doench says he enjoys working on technology development under the Platform model at the Broad Institute because they are “not just developing technology for its own sake,” but work in true collaboration with scientists asking biological questions. Doench loves that he still gets to see data as it’s coming out and says “That first glimpse of what the data look like... when it looks good, that’s a high that can last for several days.”

Recently Doench has been working on developing CRISPR pooled libraries for use in genetic screens and has contributed much of his knowledge to the CRISPR resources at Addgene. His background in history and specifically the history of RNAi left him a bit skeptical of the technology at the start of the CRISPR craze, but he says, “In the case of CRISPR, the hype was completely justified… it has been just an incredibly useful technology.”

He goes on to explain that, “everything that could be done with RNAi in terms of determining what genes are involved in biological process X, you can do with CRISPR technology...” and “with CRISPR, just the results are so much cleaner. The time frame from doing your primary screen to knowing what are the real hits is so much shorter…. it’s a great screening technology.”

Doench thinks that the future of CRISPR will be in high throughput functional characterization of specific edits to the genome. Such characterization can be done in a low throughput way now, but Doench says the technology needs to advance (become more efficient in terms of editing and screening) such that thousands of individual edits can be studied quickly.

Although Doench’s thorough understanding of CRISPR is what got him involved with Addgene - he says he’s “known of Addgene basically since the beginning and [has] been using Addgene ever since” and that he’s “very much in line with the overall mission of making science easier and more transparent. That’s largely my job [at the Broad] too… to make science easier for people everywhere…. the nonprofit, sharing ethic that Addgene has behind it is something that very much resonates with me.”

About Addgene’s role in the future, Doench says, Addgene is “a central resource for what is worth having. The work that [Addgene’s] outreach scientists do to comb through the literature, to go and talk to the people who actually have these plasmids, figure out what they do and what they might be able to do and to organize it and catalogue it, I mean that’s the critical function really…. Addgene’s role as a central repository for what is useful and what was used once and could be used again… is absolutely critical to [its] success and your success moving forward.”

You can give Dr. Doench your own welcome in the comments section below!