We first “went viral” in 2016 when we introduced the viral service, and now we’re “going viral” again!

Starting today, our Twitter feed will be full of viral vector information. Each day, we’ll cover a different topic as shown in the graphic below. Follow the hashtag #AddgeneGoesViral to find information on the basics of viral vectors, applications, and some new resources available from Addgene. There’s a lot to talk about! And by the way, there will be viral vector jokes and comics. 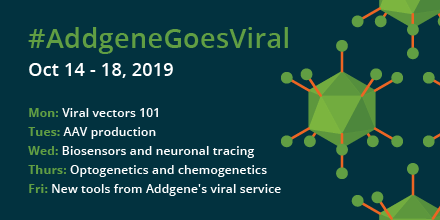 In addition to “going viral,” we also have some other exciting news. Last week, we launched our new AAV Data Hub, an open platform for scientists using AAV to find and contribute experimental information, such as titer, serotype, injection site, and incubation time. Learn more about the Data Hub in this blog post.