A Scientist's Guide to Ebola 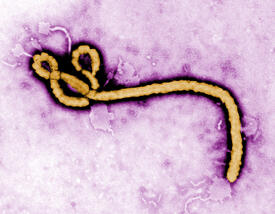 It’s pretty hard to escape news and fears of Ebola these days, as the infectious disease once limited to small pockets in Africa has spread to urban areas and across the ocean. A nurse in Dallas was the first to be infected in the United States while caring for a patient, despite wearing protective gear, and now comes news of a second Texas healthcare worker with symptoms. The World Health Organization says the number of new cases could rise to 10,000 a week within two months.

That said, Ebola is not considered a “terribly infectious disease” – infection occurs via body fluids not through the air and that’s considered unlikely to change – but the illness has been fatal in 70 percent of the most recent cases, primarily in West African countries. Even that grim estimate might prove to be an underestimate. Given all the excitement and speculation, we thought we’d do a little digging and assemble a rough guide to the science of Ebola and related resources.

A few basics: Ebolavirus (EBOV) is a Filovirus, a family characterized by single, linear, negative-sense, single-stranded RNA genomes. The virus does all of its damage with just seven structural proteins. But, as NPR explained, it’s not the virus itself that kills you, but the cytokine storm it ultimately sets off.

The virus works its way into immune cells in ways that aren’t fully understood. Much of the action depends on a surface glycoprotein – the only viral protein present on the virion surface – making it critical for viral attachment and fusion. Once inside a host cell, new evidence in PLoS Pathogens shows that the Ebola virus glycoprotein remains essential in allowing those infected cells to go undetected by the immune system in a novel way, by shielding host cell surface proteins.

Researchers at the University of Virginia School of Medicine have also recently described how the glycoprotein transforms itself to escape vesicles within host cells and turn the cell into a veritable virus factory.  Their findings were reported in the Journal of Virology.

The EBOV glycoprotein’s role in infection also makes it a critical component of vaccines and the target of neutralizing antibodies and inhibitors of attachment and fusion.

For those looking to delve deeper or stay tuned, there are plenty of online resources available. I recommend a few:

-The recently established Ebola Genome Portal at the University of California, Santa Cruz, offers sequence data on five strains of Ebola representing the latest outbreak and earlier ones, along with links to the relevant scientific literature.

-In light of the current Ebola crisis, Science and Science Translational Medicine have made their complete collection of relevant papers freely available here.

-PLoS and The New England Journal of Medicine have similarly curated their Ebola-related content.

-And the latest updates on the ongoing outbreak from the CDC and WHO.

- For anyone interested in EBOV’s past, present, and future, don’t miss Carl Zimmer’s coverage on the subject in the New York Times and on his blog, where he has offered to answer readers' questions.

If you have information or another resource to add, please tell us about it in the comments.