The Stingy Scientist: How the Baby Gel Box Was Born 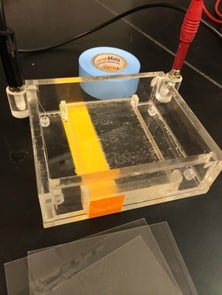 It is probably good news for our environment that more people are paying attention to living a “green” life and creating less waste.  Most communities seem to have recycling programs and it seems to me that most Addgenies make an effort to avoid plastic bags and to conserve resources where possible.  At the lunch table, for instance, we have a plastic container problem…reusable containers pile up by the sink after lunch as fewer and fewer people use plastic bags.  We also try to recycle our discards according to the Cambridge, Massachusetts guidelines and wear an extra sweater so we don’t have to turn up the heat when there is a bad Northeastern chill.

Few of us spend much time thinking about conserving resources in the labs. Disposable plastic materials are fairly inexpensive in this country and we are quick to throw out chipped or imperfect equipment.  We can’t safely recycle these materials either.

Lab supplies and equipment are more precious in less resourced areas of the world.  Nina Dudnik, Founder of Seeding Labs, tells the story about working as a student in a rice lab in the Ivory Coast where her first job was to wash Eppendorf tubes which were to be used for 3 months before they could be discarded.  Seeding Labs does an amazing job shuttling unwanted lab supplies to places that really need them.

When I was in graduate school in the 80’s, my lab was well funded and we didn’t feel the need to reuse plasticware or think about conserving reagents and buffers.  However, I had very environmentally conscious friends who had me thinking about energy conservation even before it was a popular topic in the media.  At one point I started to become very aware of how little care I took with my discards and to be mindful of the lab materials I was using.  I started to do little things to save reagents and money.  This was the start of my interest in “stingy science”.

Practicing thrift and conservation in the lab

One stingy science project was to make my own glass milk for purifying cut plasmid DNA from agar slices.  Molecular biologists used this procedure daily before the advent of techniques like PCR and DNA synthesis. Most molecular biologists bought the pricey stuff in 50 ul aliquots in a kit with a huge amount of wasteful packaging.  Turns out, one could make a lifetime supply for about $10 US dollars worth of glass powder pruchased from a pottery supply house.  These large, cheap aliquots could be stored indefinitely at room temperature (thus also saving freezer space).  The procedure becomes less attractive when noting that one step involves boiling the glass powder in 50% nitric acid, but I never let that stop me. I only had to replenish my glass milk supplies every 10 years or so.

Actually, I was happy to hear that I am not the only Addgenie who has a thrifty streak.  One of the most accessed blogs on BitesizeBio is the protocol for making your own Taq polymerase by Outreach Scientist, Andy Baltus. Addgene founder, Melina Fan, recently shared our protocol for making competent cells to save time and money.

My other stingy science project started when I realized I was pouring large agarose gels for DNA visualization or isolation, then using only a few lanes or a small portion of the gel.  What a waste?  I started looking for smaller and smaller gel apparatus until I settled on using glass slides. With just the right amount of agarose, I could pour a very thin gel on a large glass slide using only surface tension.  It's a bit tricky to pour the right amount so the agarose doesn’t pour over the sides.  These tiny gels and tiny lanes required less agar, less ethidium bromide, less stop buffer and miniscule amounts of plasmid sample.  How satisfying?  With practice, I got good at this despite the fact that my lab mates thought this was hilarious.

Birth of the baby gel box

Finally, taking conservation to new levels, I was bothered by the fact that I was wasting buffer running my tiny gels in a normal gel box. It took a bit more ingenuity to solve this problem.  None of the commercial boxes were small enough to minimize the required area and buffer volume.  So, I designed my own gel box (see illustration above) and bribed the guys in the hospital machine shop with coffee and donuts to cut the pieces of plastic and solder this thing together.  One of the downsides—there was no cover so you had to be careful not to stick your fingers in during a run or risk minor electrocution.  These days you can buy small gel boxes, but none as small as the baby gel box and this one only cost a few dollars.  I used this apparatus for 15 years before I hung up my pipets.